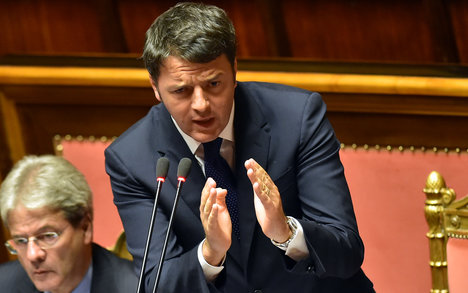 Matteo Renzi has encouraged companies to do more to help children in Syria. Photo: Alberto Pizzoli/AFP

His call followed energy giant Enel's announcement that it was pledging €500,000 ($550,000) for the UN refugee agency's “Educate a Child” project, in a bid to tackle one of the main factors driving families to leave – the challenges in getting children schooled.

“Money for aid is never money thrown away… if all of the world's companies did this think what a difference it would make,” Renzi said, calling for the private sector to help restore bombed classrooms or pay for teacher training.

The funds, pledged in response to UN chief Ban Ki-moon's appeal for businesses worldwide to do more to ease the refugee situation, will go to helping 20,000 children complete their primary school education in Syria.

The agency's spokeswoman Carlotta Sami said the programme cost around €22 a year per child.

Enel, which has been investing heavily in its green credentials and social responsibility projects since CEO Francesco Starace took over at the helm last year, posted a 2014 net profit of €517 million.