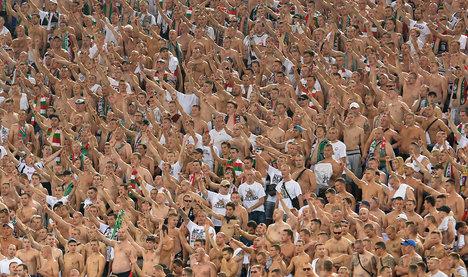 The seven were arrested on Thursday night for fighting with Napoli fans and were taken to the Poggioreale prison on Friday after being given sentences of three years and one month, the Italian AGI news agency reported.

Two Neapolitans and two Bulgarians were sentenced to house arrest for two years and four months while a third Neapolitan was given a three year, four month sentence.

Another 76 people, 60 of them Poles, were issued with stadium banning orders after extensive damage was done to the Garibaldi Square in Naples.

Those measures will last two years, according to the Naples police.

Napoli won the match 5-2 but 14 police were injured while trying to break up the violence.

Both clubs are known for their violent hooligan fringe.