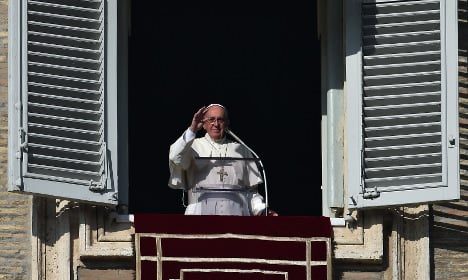 Pope Francis addresses the crowd from the window of the apostolic palace overlooking St.Peter's square during his Sunday Angelus prayer. Photo: Dominic Bouys/AFP

“The climate conference has just ended in Paris with an agreement that many describe as historic,” the pontiff said at Angelus prayers in St. Peter's Square.

“Implementing it will require unanimous commitment and generous involvement by everyone,” the stern-looking pope said.

He pointed in particular at provisions in the agreement to help poor countries badly exposed to climate change.

“I urge the international community, in its entirety, to carefully follow the road ahead, and with an ever-growing sense of solidarity,” he said.

Approved by 195 nations after a 13-day negotiating marathon, the so-called Paris Agreement sets the goal of limiting global warming to “well below” two degrees Celsius (3.6 degrees Fahrenheit) over pre-industrial levels, with a more ambitious target of 1.5 C if possible.

It also enshrines a promise by rich countries to channel at least $100 billion dollars (92 billion euros) annually from 2020 to help climate-vulnerable countries.

Without drastic curbs on these gases, they warn, future generations will be doomed to rising seas and worsening drought, flood and storms.

Poor nations that are least to blame for causing the problem will feel the impact worst.

Ahead of the November 30-December 12 UN conference, the Pope appealed urgently for action, saying it was “now or never” for a deal and the situation was “borderline suicide.”

It laid the blame for warming squarely on humanity's shoulders and called for an energy revolution that would mainly be paid for by developed countries.