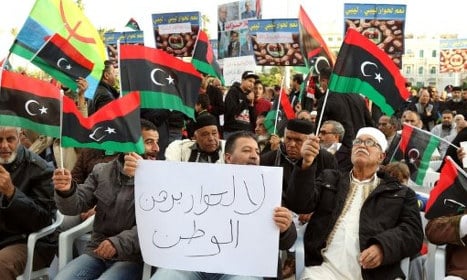 Libyan protesters take part in a demonstration against a UN-sponsored agreement on forming a national unity government, on Friday in the capital Tripoli. Photo: AFP

Western capitals fear that unless Libya swiftly forms a united government Islamic State radicals will strengthen their grip on their new coastal territory.

And, without a recognised central authority and amid ongoing faction-fighting, Libya could once again become a major source of refugees and migrants headed for Europe.

But critics of the proposed deal, which could be signed by Wednesday, warn that rushing the political reconciliation process might only deepen Libya's political fault lines.

Italy's Foreign Minister Paolo Gentiloni will co-chair the talks with US counterpart John Kerry, who was to fly in to Rome on Sunday from the UN climate summit in Paris.

“We have to demonstrate that the action of governments and diplomacy can be faster and more effective than the threat of terrorism which we face here,” Gentiloni said.

“We cannot allow it to develop and we have to back our ability to stop it with a negotiated approach involving the Libyan parties,” he added, at a conference Friday.

After Libyan political representatives had agreed to sign a version of the UN-mediated deal on Wednesday, he said, the Rome talks are supposed to show international solidarity.

The talks will first bring together ministers from the region and beyond, then they will be joined by about a dozen Libyans representing rival groups.

This, he said, would “provide framing and momentum for the signing ceremony” to take place in Morocco.

The United Nations deal has the benefit of unifying the negotiation process and has the support of the regional powers supporting rival factions in Libya's conflicts.

For these reasons, US and Italian officials, believe it is time to end the division of Libya between two rival governments and a patchwork of warring factions.

But others warn forcing Libyans into a foreign-mediated process could strengthen existing resistance to the pact and undermine future peace efforts.

Writing in Politico, the pair said it is “wishful thinking” to believe a majority of Libyans will back a relative unknown, Faez Serraj, as head of a sole national authority.

“It is highly likely that security conditions will prevent Serraj and his colleagues from taking office in Tripoli,” they warned.

“This means they will have no control over state administration, including the pivotal central bank. It could trigger renewed fighting for control of the capital.”

And any attempt, whether failed or successful, to restore authority to Tripoli could feed separatist rumblings in eastern Libya, they warn.

“The UN process is much weaker than many EU governments realise, but it is the only game in town,” said Mattia Toaldo of the European Council on Foreign Relations.

Sunday's conference, he suggested, was “more about announceables than deliverables.”

On Friday, Salah el-Makhzoum, a vice president in the parliamentary body based in Tripoli, said it was a “happy day” when he announced the deal would signed December 16.

And an official of the rival but internationally-recognised parliament, Mohammed Choueib, said “we have decided to move beyond this difficult period and ask everyone to join us.”

But neither man could promise their colleagues in Tripoli or Tobruk would ratify the deal, under which Libya would be governed by a nine-member presidential council.

And hundreds of protesters gathered in Tripoli's main square on Friday afternoon, waving Libyan flags and holding signs calling for a rejection of the UN deal.

It has had rival administrations since August 2014, when an Islamist-backed militia alliance overran Tripoli, forcing the recognised government to take refuge in the east.

US and European sources say the aim is to form a unity government within 40 days of Wednesday's signature, after which UN sanctions could be imposed to force an accord.

If the deal sticks, it would enable Libya to better govern itself and to fight the Islamic State fighters that have seized territory around Kadhafi's hometown Sirte.

But it would also allow a UN-recognised administration to request arms shipments and even foreign military intervention to help rid itself of the insurgents.

“It will be up to the new presidency council of the government to decide what they want, and then up to the countries they ask to decide how to respond.”

Italian premier Matteo Renzi has said Rome would command a military mission should the UN agree, and there have been reports France and Britain are ready to take part.