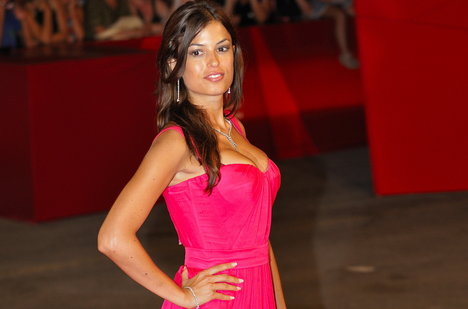 Ex-Italian showgirl, Sara Tommasi, has returned to her hometown to work for her local football team. Photo: Wikimedia Commons

Tommasi, 34, has returned to live with her parents at her home in San Benedetto dei Marsi, a town in Abruzzo, while working as the sporting manager for her local football team, Marruvium.

A spokesperson for Marruvium, who ply their trade in Italy's amateur league 2B, told The Local the role was “a sort of rehabilitation programme for Sara”, who has had a tough time since being embroiled in the Berlusconi sex scandal.

“She started helping out at the end of October and since then she's been much happier,” the spokesperson added.

Club president Romeo D'amore said he was happy to hire the former beauty queen to help steer the minnows in the right direction, declaring he had no doubt she was the right woman for the job.

“I'm honoured, we are a very serious outfit and Sara is going to fit right in,” he told reporters.

Tommasi, who studied for four years to obtain a degree in economics from the prestigious Bocconi university in Milan before beginning her career as a showgirl, said was also looking forward to her new role.

“I've been through a period in which I haven't been at my best,” she added.

“Now I'm feeling good and willing to give it my all.”

In 2011, she was at the centre of a media storm after being implicated in Silvio Berlusconi's underage sex trial as one of the escorts who were allegedly paid to attend the former premier's infamous 'bunga bunga' parties.

In an interview given that year to the women's magazine, Dive e Donne, Tommasi accused the Italian secret service of implanting a microchip under her skin and drugging her “for sexual ends” in order to encourage her to participate in the lurid parties.

Tomassi, who also dated footballer Mario Balotelli, then began working as an adult film star. Her first hardcore pornographic film, entitled 'My First Time', was given a high profile release on July 6th 2012.

But immediately after the film came out, the star announced she was undergoing treatment for bipolar disorder, which she claimed had been brought on by the intense media scrutiny cast upon her during the so-called Ruby trial.

Tommasi soon found herself at the centre of another high-profile scandal when she had her second pornographic film, 'Private Confessions', seized by police before it could be released.

She claimed the film's producer, Federico De Vincenzo, had drugged her before forcing her to film. In 2014 a court found in favour of Tommasi and sentenced De Vincenzo to two years and 10 months in prison.

In her new role as sporting manager of Marruvium, Tommasi waves goodbye to pornography – a chapter of her life she has called “regrettable”.

Tommasi, herself an avid fan of AS Roma, admitted to now following the fortunes of Marruvium home and away as she bids to turn over a new leaf.

“I'm a woman dedicated to home and sport,” she said.