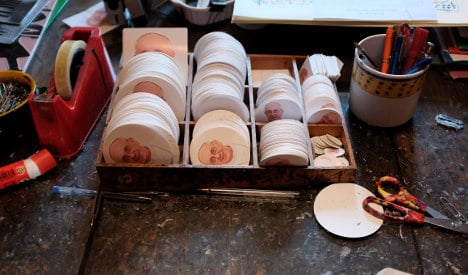 Pictures of Pope Francis are arranged on a table before being paste on papal parchments (the real deal) in a workshop in Rome. Photo: Alberto Pizzoli/AFP

Pilgrims flocking to Rome for the Vatican's Jubilee year can purchase parchments with a benediction by Pope Francis, with profits going to the Vatican's department for charitable works.

But not all of the ones on sale around the tiny city state are the real deal.

Interior Minister Angelino Alfano showed journalists one of the documents, which are produced in several languages, complete with a fake papal seal and a photograph of the smiling Argentinian pontiff.

Teaming up with Vatican police, detectives uncovered the printer behind the scam as well as a shop near Saint Peter's Basilica where the scrolls were being sold.

The colourful and ornate parchments, which for centuries were painted and written by hand, and bought for marriages and baptisms, have since January been produced electronically to cut production costs and reduce the risk of fraud.

The Vatican is on high alert for swindlers hoping to target tourists and pilgrims by offering seemingly 'official' package deals at extortionate fees or peddling fake goods.

The ministry said its crackdown on counterfeits in general had seen “close to 250 million objects seized in Italy” in nine months, “double the 2014 figure”, for a value of 716 million euros.

Other objects seized in last week's raids included toys which were harmful to children, Alfano said.