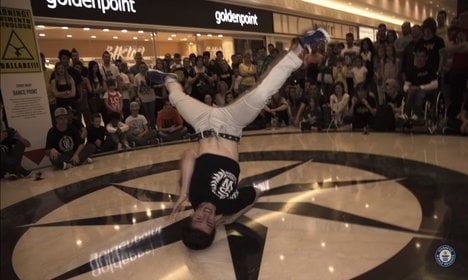 The world record attempt was performed at the Adriatic 2 shopping centre in Treviso, northern Italy, in front of judges from the Guinness World Records and an excited crowd of onlooking shoppers.

To break the record, Maso had to perform each headspin with perfect form, keeping his head in contact with the floor throughout. The dizzying attempt was captured on video, and can be seen below.

With his 49 halos, Maso smashed the previous record held by Serbian breakdancer Miroslav Balog, who notched up 40 straight spins in November last year.

Maso's attempt at a world record was sparked by a friendly rivalry he has with another member of his breakdancing crew, Massimo Bet.

Bet set the world record in 2009 for the highest number of another athletic dance move, known as an 'airflare', performed in one minute, while appearing on the Italian version of the TV show 'Record Breakers'.

“He broke the record for the airflare and from then on I wanted to be no less than him,” Maso wrote in a letter to the Guinness World Record judges when he put himself forward.

He trained for six years later before the hard work paid off.

Maso is just latest in a long list of  record-breaking Italians in 2015, which has been a vintage year.

So far Italy has overseen the construction of the world's largest decorated cake, longest pizza and tallest Lego tower.