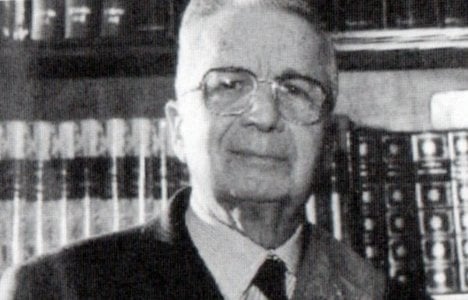 Gelli was the head of the secretive 'P2' lodge – a masonic structure that exerted considerable political power until it was discovered by Italian investigators in 1981.

P2, or Propaganda Due, was an influential secret network that counted politicians, judges, bankers and senior military figures amongst its members.

Its tentacles stretched throughout the upper echelons of the Italian establishment, although an attempt to have its members jailed for political conspiracy and attempting to destabilise the state finally failed in 1994.

It is best known internationally for having been at the heart of a murder mystery involving both the mafia and the Vatican which centered the body of “God's banker” Roberto Calvi being found hanging beneath London's Blackfriars bridge in 1982.

Born in Pistoia, Tuscany, on April 21st 1919, Gelli was always politically minded and a self-described fascist.

In the years that followed, Gelli rose to prominence serving as liaison officer in the Italian army – during which time he had frequent correspondence with German Luftwaffe commander Hermann Goring. As the fascist tide began to turn in Europe, Gelli defected and began working for the American secret service.

After the war, Gelli joined the Freemasons and became head of the P2 lodge in 1966.

But the lodge was expelled by the Italian Freemasons in 1974 and made illegal by the state – or at least by the parts of the state that P2 didn't count among its members.

As Gelli's power and reach grew, he was able to acquire the leading Italian newspaper, Corriere della Sera, in 1977, after which he fired the paper's editor and gave the popular daily's take a more right-wing political stance.

Newspapers aside, opinion varies over just how much influence P2 had over Italian political life.

But the group has been implicated in a number of scandals, including the execution of Italian Prime Minister Aldo Moro in 1978 and the bombing of Bologna train station in 1980.

A list of P2 members found in Gelli's villa by police in 1981 named 962 notable and powerful people from across all walks of society. They included bankers,secret service chiefs, former premier Silvio Berlusconi and Victor Emmanuel, the son of Italy's last king.

The secret society has often been described as a 'shadow government' of Italy and documents found hidden in Gelli's daughter's suitcase in 1982 outlined its goals for political and economic domination.

Speaking in 1996, Gelli explained that that then Prime Minister Berlusconi was carrying out P2's plans.

“He's implementing my plan for democratic rebirth to perfection,” he said. “He should at least give me copyright.”

Similar comments were made frequently and only fuelled conspiracy theories about the power and reach of P2.

It was only following the high-profile collapse of the bank, Banco Ambrosiano, that the existence of the secret society became common knowledge  and theories began to emerge about its power.

At the centre of Ambrosiano's collapse was Gelli and P2. Following the scandal, Gelli went on the run to Switzerland, and after to Pinochet's Chile.

Italian investigators finally caught up with Gelli in 1987 and he was sentenced to eighteen years for his role in Ambrosiano's failure. He also received another eight year sentence from a court in Florence for inciting right-wing terrorism.

While answers to the questions 'who killed Aldo Moro?' and 'who was behind the Bologna bombing?' are still liable to divide Italians, according to which side of the political divide they lie on, figures like Gelli are still central to how many Italians view politics.

Italians even have a word for it: dietrologia. This is the belief that hidden realities lie below the accepted version of events. It is a concept that many other cultures lack, or at least struggle to express in just one word.

Perhaps they've just never come across a figure like Gelli, who is in some ways symbolic of much of Italian politics.

Gelli, it should be added, never served a day in jail despite his convictions, dying at the ripe old age of 96 at his home of Villa Wanda, overlooking the Tuscan countryside.

Who knows what secrets went with him.