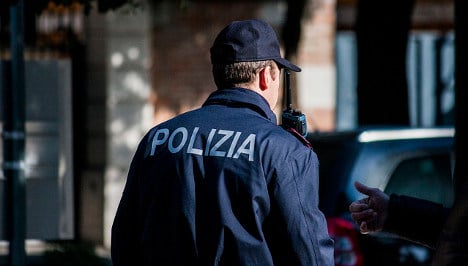 The bomb exploded outside a police training school in Brescia. Photo: Chris Z

The rudimentary bomb, which exploded at around 4pm, caused some damage but no casualties, police said.

A man, wearing a mask and described as having an “athletic” build, was seen on CCTV planting the bomb at the entrance of the Pol G.A.I police training school, where some 200 students are currently hosted.

Police, a forensic team and officers from Digos, Italy’s anti-terrorism squad, were immediately at the scene.

Investigators said the bomb appeared to be a crude device, but they are yet to establish whether it was ignited manually or remotely.

Several lines of inquiry are being pursued, including terrorism.

Brescia has been at a the centre of several anti-terror sweeps in recent years, so much so the Interior Ministry is considering establishing a national counter-terrorism attorney in the Lombardy city, La Repubblica reported.

In June, two men were arrested on suspicion of supporting the Isis extremist group and plotting to carry out attacks in Italy. One of the targets included the Ghedi military base, near Brescia.

Another man, who lived in Brescia and was suspected of recruiting on behalf of Isis, was deported in July.

Italy has upped its anti-terrorism sweep in the wake of the Paris attacks last month, tightening security at airports, borders and monuments across the country.

Earlier this week, a Syrian refugee was arrested in Sicily on suspicion of being connected to Isis.