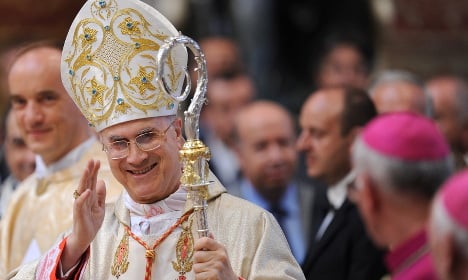 The cardinal was removed from his post by Pope Francis in 2013. Photo: Alberto Pizzoli/AFP

Tarcisio Bertone, the Vatican's former Secretary of State, a role equivalent to prime minister, has insisted he paid for the 300,000 euros renovation of the flat overlooking Saint Peter's Square himself.

But a document published in a book this month by Italian investigative journalist Emiliano Fittipaldi purportedly shows he used 200,000 euros from the Bambin Gesu Foundation which collects donations for a children's hospital in Rome.

“Acknowledging that what has happened has been detrimental to the Bambin Gesu, Cardinal Bertone wanted to meet us half way, donating a sum of 150,000 euros,” the hospital's president Mariella Enoc said Saturday, according to the reports.

Bertone, 81, has defended his luxury lodgings, saying he shares the 300-square metre apartment inside the walls of the Vatican with a community of nuns who look after him, and the flat's huge terrace is actually part of the building's communal area.

The flat is a stone's throw from St Martha's Residence — the modest Vatican hotel Francis chose to live in after rejecting the opulent papal apartments which come with his job for a more humble lifestyle.

The cardinal was removed from his post by Pope Francis in 2013, shortly after the pontiff was elected.

Bertone's stint as Secretary of State under ex-pope Benedict XVI was highly divisive, with critics accusing him of being too authoritarian and connected with sleazy Italian politics. He blamed “moles and vipers” for his downfall.

Fittipaldi is currently on trial in the Vatican along with another investigative journalist for publishing documents that have embarrassed the Vatican and which were allegedly illegally obtained by disgruntled employees.

Aso on trial are the three people accused of stealing and leaking the secret papers — many of them appearing to depict irregularities and extravagance in the Holy See's spending.