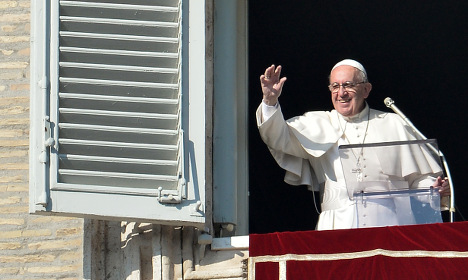 "I encourage everyone to continue energetically down the path to an end of violence and a negotiated solution for peace," the Pope said on Sunday. Photo: Tiziana Fabi/AFP

“I am moved to turn my thoughts to beloved Syria and express my great appreciation for the agreement just reached by the international community,” the pontiff said following the Angelus prayer in Saint Peter's Square.

“I encourage everyone to continue energetically down the path to an end of violence and a negotiated solution for peace,” he said, after the UN backed a US and Russian initiative Friday to end Syria's brutal civil war by summoning rebels and the regime to the negotiating table.

The Argentine pontiff also sent his thoughts to “Libya, where the recent engagement between parties for a national unity government inspires hope for the future.”

An agreement was reached this week among rival Libyan factions in a bid to stem the chaos in that country which international experts fear is creating conditions for the so-called Islamic State to put down roots.

The accord, reached during UN-mediated talks in Morocco, faces an uncertain future however, with some Libyan tribal or regional groups rejecting it in advance.