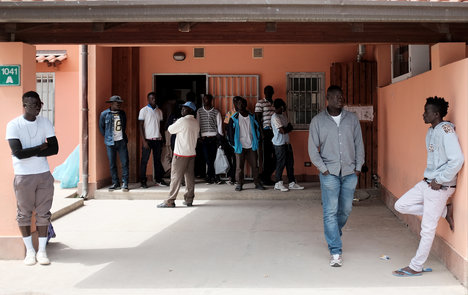 Angry migrants in the northern town of Ceranova have protested the lack of wifi and a cleaner in the villa where they are staying. File photo: Alberto Pizzoli/AFP

The 24 protesting refugees from sub-Saharan Africa have been asking for somebody to help maintain order at the duplex villa in the town of Ceranova, where they have been housed since the summer.

They are also upset that Wi-Fi has not been installed in the villa, meaning they can't make Skype calls to their relatives back home, La Repubblica reported.

The protests first took place late last week when the town's refugees blocked main roads to get their message across.

The situation soon took a turn for the worse when the refugees began to tip their rubbish on to the sleepy town's main streets to make their point.

The scene led to heated arguments between the refugees and members of the local community and the town's mayor, Alessandro Grieco, had to intervene personally with the help of three police officers to defuse the situation.

“Obviously it's very important for refugees to have access to the internet and not just so they can stay in touch with their families,” Barbara Spezzi, who manages a refugee center near Turin, told The Local.

“The internet helps refugees keep updated with what's going on at home and in Italy, which helps them integrate into Italian life. It's also a great learning tool too: we had a case of a girl who was following her university lectures on YouTube.”

As news of the protests spread, it became a national issue, having been seized upon by Italy's anti-immigration Northern League party.

Outspoken party leader, Matteo Salvini, even joked about sending the left-wing journalist, politician and leader of the Chamber of Deputies, Laura Boldrini, to clean up the migrants' mess.

“They want someone to clean their homes – can you believe it?” Salvini asked reporters. “To keep them happy, let's send Boldrini.”

Since last week's protests, Grieco has called a meeting with the regional prefect, and expelled the ringleader of the protests, a 24-year-old man, from the refugee facility.

“Until now nothing bad had happened and we are looking into the incident. The migrants have obviously flagged up a few issues for them but this is not the way to draw attention to them.