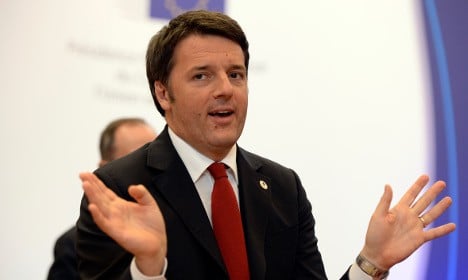 Businessman Fayez el-Sarraj has been designated as the head of a 17-member
transitional Libyan government which is scheduled to take office in mid-January under an accord signed by some members of the country's two rival parliaments on December 17th and subsequently endorsed by the UN Security Council.

Sarraj's visit to former colonial power Italy was not announced and he did not speak to the press after the closed doors talks with Renzi.

A statement released by the Italian leader's office said Renzi had “expressed his full confidence in the capacity of the new Libyan authorities to meet the pressing challenges awaiting them, starting with the formation of a government and the construction of an institutional framework based on inclusion and national reconciliation.”

Renzi reiterated Italy's previous expressions of willingness to lead an international peace and reconstruction force which could be deployed to its former colony with UN blessing once a ceasefire and a degree of political stability have been established.

“Italy is ready to respond rapidly, within the necessary framework of international legality, to any potential requests for assistance from Libya,” he said.

Many Libya watchers are pessimistic about the prospects for the proposed new regime with elements of both an Islamist-backed assembly in the capital Tripoli and an internationally recognised assembly in eastern Tobruk having voiced their opposition.

Libya has been in chaos since the 2011 uprising that toppled dictator Moamer Kadhafi, with armed factions battling for territory and control of its oil wealth.

Moves to try and engineer greater stability have accelerated against a backdrop of signs the Islamic State group is strengthening its foothold in an area around the coastal city of Sirte.

Italy has extensive energy interests in Libya which could come under threat and is also keen to address the chaos in the country as a way of stemming the unprecedented flow of refugees and migrants towards its southern shores, most of them having begun their crossing of the Mediterranean in Libyan ports.