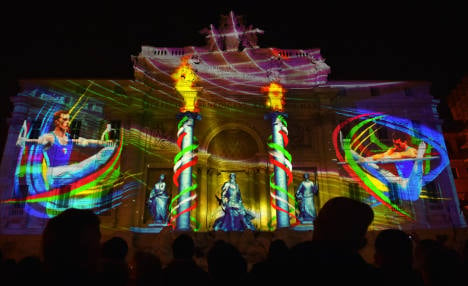 Images are projected on the 18th-century Baroque-style Trevi fountain to promote Rome's candidacy for the 2024 Olympic Games. Photo: Gabriel Buoys/AFP

As anticipated towards the end of last year, all attention turned to who would follow in the footsteps of Giorgio Napolitano after he stepped down as president in January.

But the man eventuallly elected for the job was Sergio Mattarella, a judge from Sicily. It was another big year for Italy in terms of its fight against terrorism, with security stepped up and anti-terrorism laws tightened in the wake of the January attacks at the offices of Charlie Hebdo, the satirical magazine in Paris and even more so after the Paris attacks in November.

A total of 259 people were arrested on terror charges over the past 12 months, with 67 of them being expelled from the country.

At the same time it's been another significant year for the flow of migrants into Italy from conflict zones, with hundreds of thousands arriving since the start of the year.

Come February, and the so-called ‘Captain Coward’, Francesco Schettino, got his comeuppance when he was sentenced to 16 years and one month in prison for causing the 2012 Costa Concordia cruise ship disaster which claimed 32 lives.

The other major ruling of the year came in March, when Amanda Knox and Raffaele Sollecito were finally acquitted of the murder of British student Meredith Kercher by Italy’s Supreme Court.

Also in March, one of Italy’s oldest and most famous brands, Pirelli, was sold to Chinese investors.

In what is the worst disaster yet involving migrants crossing the Mediterranean to Europe, some 800 people died in April as they tried to make their way to Italy in rickety boats.

But as anti-immigration regions in the north rallied, refusing to accommodate those who manage to survive the crossing, in May we reported the heartwarming story about the migrant who saved a woman from drowning in Rome’s Tiber River. It was one of our most popular stories of the year. It was a crazy year for weather, with heatwaves coming and going between May and August, broken up in some areas by torrential rain, hailstones and tornadoes.

The country then basked in warm temperatures over the final few months, enabling people to flock to the beach as late as mid-November. For the first full year in a while Italy’s government actually managed to stay in tact, with Matteo Renzi being praised for the economy’s uptick and a slight drop in unemployment as he heads towards his third year as prime minister.

But things haven’t been so calm in Rome politics, with mayor Ignazio Marino ousted in October and the so-called ‘mafia capitale’ corruption trial getting underway in November.

And there’s never a dull moment where Silvio Berlusconi is concerned, even if his political popularity is waning.

He’s been trying to orchestrate a comeback ever since being let off community service duties at a home for Alzheimer’s sufferers in Milan – his punishment for his tax fraud conviction – early for “good behaviour”.

But he’s only really managed to make headlines for his outings with Russian President Vladimir Putin – who didn’t keep his pal waiting as long as he did Pope Francis during a visit to Italy in June. The pair got together in Crimea again in September, a trip that got Berlusconi banned from entering Ukraine, and sparked a probe after the friends allegedly quaffed a vintage bottle of wine.

The other Berlusconi headlines mostly revolved around his alleged links to the latest Vatileaks scandal, a potential ‘bunga bunga’ retrial…and his debut on Instagram.

The Italian rugby team might have failed to leave their mark at the rugby World Cup, but it’s been quite a positive year for Italy in the world of sport. Two Italian women tennis players made it to the final at the grand slam at the US Open in August, with Flavia Pennetta claiming victory.

In September it was announced that Rome is in the running to host the Olympics in 2024.

Meanwhile, the Italian football team will get another chance to prove themselves in a major tournament after they qualified for the 2016 European Championships in October.

There is still so much to be discovered about Italy, so it probably comes as no surprise that some of our most-read stories this year were about fascinating archaeological finds.

Among them was the pre-Roman tomb that was unearthed in Pompeii in September, the discovery of a frescoed Roman room in November, and more recently, the sunken haul of Roman fish sauce found off the Italian coast. The Local Italy would like to take this opportunity to thank you for reading the website over the past year and wish you a very happy 2016! 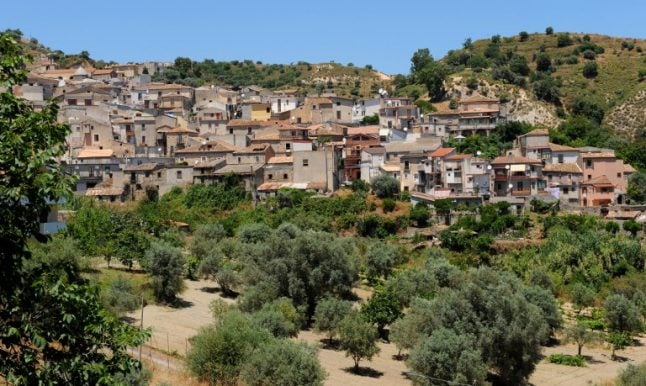 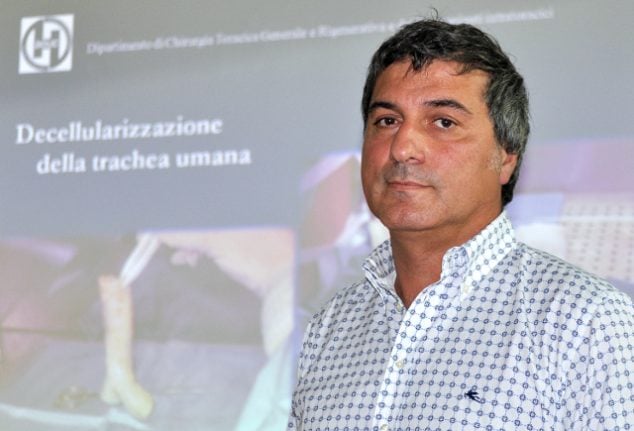 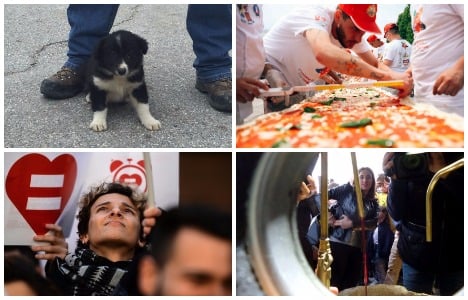 A refreshing glass of red wine is just want you need at the end of a long walk. And the next best thing? It's completely free. The fontana del vino is located in Caldari di Ortona, in Abruzzo, along a popular pilgrimage route, the Cammino di San Tommaso. The Ortona fountain is not the first in Italy to offer wine, but its creators describe it as the country's first 'proper' wine fountain, because the wine will be accessible every day. Add it to your 'must do' list for 2017! The cats are purr-fectly fine around people. Photo: I Gatti di Su Pallosu

In May we discovered that a cat sanctuary exists on a remote Sardinian beach. The beach, where visitors can play with kitties in the surf or watch them lounging on the sand, was even named one of the island's best tourist destinations by travel website, TripAdvisor.

“People love cats and they love beaches too, so it's a recipe for success,” Andrea Atzori, who founded the non-profit sanctuary with his wife in 2011, told The Local at the time. Italy suffered three major earthquakes this year, with the one on August 24th killing 300 people, destroying towns and leaving thousands displaced. But there were also some heartwarming tales, such as the one about the puppy, named Terremoto, who was saved from the rubble days after an earthquake in Norcia on October 30th, and who is now in training as a rescue dog. A postcard sent by an Italian prisoner of war from a Nazi labour camp in 1944 was finally delivered, following a series of strange coincidences which led to a high school teacher stumbling across the card on the street.

“I don't know if it's a case of 'being in the right place at the right time',” teacher Valentina Romano told The Local in October.

“But it was very emotional to find the postcard. When I saw the stamp with the Nazi eagle, I got goosebumps.”

We learnt that pasta won't make you gain weight! If you'd banished pasta from your cupboard due to concerns over weight gain, then think again: an Italian study found that the more pasta you eat, the less likely you are to gain weight. Emma Morano, from Verbania in northern Italy, celebrates her 117th birthday in November, making her the last known person alive who was born in the 19th century.

… And we learnt that cheese, wine and friends are the keys to a long life But you might have to move to Sardinia and adopt the local diet, which includes Cannonau, a red wine packed with antioxidant compounds which help slow the aging process, in order to be in with a chance of eclipsing 100.

Two former nuns who fell in love during a mission were among the many finally able to make their love official, after civil unions were legalized The pair tied the knot in September in Pinerolo in Piedmont, northwestern Italy, in a ceremony officiated by mayor Luca Salvai, from the Five Star Movement.

Some of us learnt Italian, and found it has a range of surprising benefits Did you learn it for the people.. or for the food? File photo: Pexels

Italians made the world's longest pizza The world's longest ever pizza, measuring a whopping 1854 metres, was made in Naples back in May.

There were medical advances The Molinette hospital in Turin said earlier this month that it had achieved a world first by successfully transplanting a kidney in the place of the spleen in a six-year-old girl. The child had been on dialysis since birth because of a rare kidney anomaly and a malformation of the abdominal blood vessels.

REVIEW
Ten good things that happened in Italy in 2016 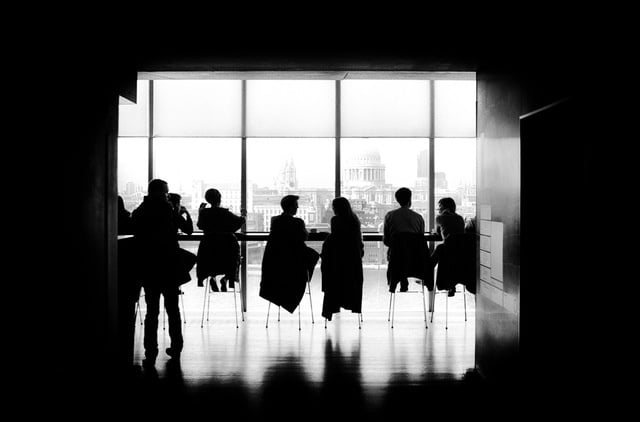