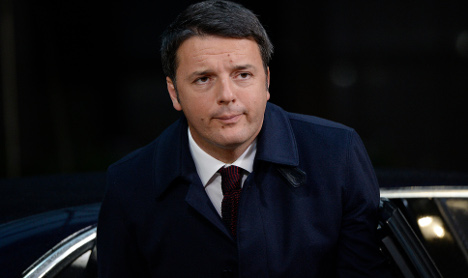 Prime Minister Matteo Renzi will wrap up the year with a skiiing holiday in Cormayeur. Photo: Thierry Charlier/AFP

Luca Lattanzi, who once vied to become mayor of Rome, wrote: “Renzi on holiday in Cormayeur? Someone let Isis know…”

The premier is due to wrap up the year with a family skiing holiday at the Aosta resort.

But at a time of heightened fear over a terrorist attack in Italy, and especially following the Paris attacks in November, the “joke” was slammed for being in very bad taste.

Claudio Martini, the deputy leader of the Senate for the ruling Democratic Party, said Lattanzi “should be ashamed”, while adding that it was disrespectful to the victims of Isis to even acknowledge such a statement from the “fanatical” politician, and called on Forza Italia to take action.

Alessia Morani, also from the Democratic Party, said the message was so lowly that it should not even warrant a political consideration.

“It’s a reflection of pure idiocy,” she added.

“A political leader who invokes that Isis should take action against the prime minister automatically operates outside the democratic process and is unworthy to hold such a position.”

The post has since been removed but Lattanzi was quick to defend himself, claiming the message was simply a “joke”, while telling his critics to “calm down”.

“It wasn’t intended to cause any malice, it was just for a laugh. I don’t think Isis was listening to me…anyone who sees evil in this joke has serious problems.”