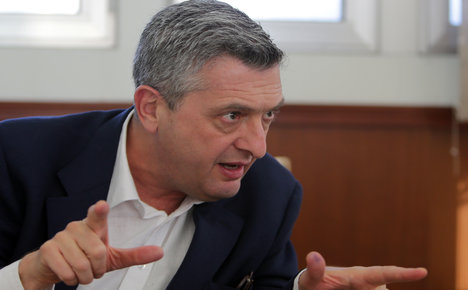 “UNHCR is navigating extraordinarily difficult waters,” Grandi said in a statement on Monday.

“The combination of multiple conflicts and resulting mass displacement, fresh challenges to asylum, the funding gap between humanitarian needs and resources and growing xenophobia is very dangerous,” he said.

The 58-year-old diplomat officially replaced Antonio Guterres on January 1st, when the former Portuguese prime minister stepped down after a decade at the helm of the refugee agency.

But Grandi arrived for his first day of work at the UNHCR headquarters in Geneva on Monday morning, the agency said, adding that he was taking the wheel “at a time of unprecedented displacement challenges.”

Late last year, the agency announced that the number of people displaced by war and violence hit a record high of more than 60 million in 2015 – surpassing even the 50-million mark reached during World War II.

Europe too faced its worst migration crisis since 1945, with over a million men, women and children reaching its shores in 2015.

Most of those risking the perilous journey across the Mediterranean mainly to Greece and Italy were refugees desperately fleeing war and persecution in Syria, Afghanistan and Iraq.

Over 3,700 people drowned or went missing at sea, UNHCR said.

The choice of Grandi for the key post was seen as a nod to Italy, which has been particularly hard-hit by the refugee crisis in Europe.

Denmark's restrictive policies on refugees were meanwhile cited among the factors weighing against one of his competitors, former Danish prime minister Helle Thorning-Schmidt.

Grandi was also recognized for his work in several tough UN positions over a 30-year career in international affairs.

Among them was his challenging work as head of the UN Palestinian refugee agency UNRWA from 2010 to 2014, a post he held after serving as its deputy from 2005 to 2010.

Grandi had previously worked as deputy envoy to the UN aid mission in Afghanistan and was UNHCR's mission chief there.

He has also been involved in UNHCR efforts in Sudan, Syria, Turkey and Iraq, and led humanitarian operations in Yemen and the Democratic Republic of Congo.

But leading the UN refugee agency at this historic juncture could prove his toughest task yet.

“The road ahead is a challenging one,” Grandi said.

“But I hope that – working with governments, civil society and other partners – we will make progress in ensuring international protection and improved living conditions for millions of refugees, internally displaced and stateless people.”