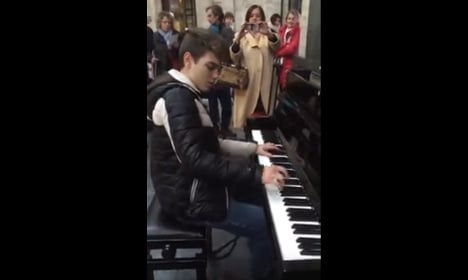 21-year-old Emanuele Fasano’s performance went viral after being posted on Facebook (video below), earning him legions of fans from across the globe.

And it's all because he missed his train home.

On December 23rd, Fasano, who was travelling to Rome to spend the Christmas holidays with his family, wandered around the station and saw the piano. Looking to kill some time before the next train arrived, he began to play, stunning passers-by with his virtuous performance.

A crowd quickly gathered as people took a moment from their hectic pre-Christmas schedule to listen to the music, and among them was Italian television producer Alberto Simone.

Simone, who lives in Los Angeles but was in Italy on a brief visit, recorded the performance on his phone, uploading the video to his Facebook page the following day with the caption: “Milano Centrale station. A piano is available for anyone. And this boy passes by.”

Some 3.3 million people have already watched the video, which has been shared almost 70,000 times on the social networking site.

He said that he had been playing the piano since he was four, and had performed on the one at Milano Centrale on several previous occasions.

“On Christmas day, when I was told that I already had so many views I almost didn’t believe it. My dream? To live off music, but for now I’m enjoying this great Christmas gift.”

Thousands of commenters on Facebook asked who the young musician was – and the name of the beautiful tune, which many thought they recognized as the work of Italian pianist Ludovico Einaudi.

In fact, the melody spanning six octaves and featuring dramatic crescendos as well as more delicate passages, was an original composition by Fasano, called Non so come mai.

After the video's success, Fasano received many messages praising his talent, as well as several from girls saying they were “in love” with him – and two offers of work.

He told Il Corriere di Milano that he had two interviews set up, to play at a televised gala dinner in Italy and a concert in London – a city Fasano says he had “intended to go to, to seek my fortune”.

The 21-year-old has played in hotels and restaurants in Italy already, and explained his love for music.

“I think that music and art are an antidote to the instability of this life, in which nothing lasts forever,” he said.

“It might seem melancholic coming from a boy of my age, but I believe that when you play, you leave behind suffering and the uncertainty of life and enter into the eternity of music, into which you can bring your listeners.”

One member of the audience misinterpreted Fasano's motivation for playing, handing him money at the end of the performance. The pianist then gave the change to beggars in the station, one of whom embraced him and said: “Today I will eat something, thanks to you.”

Fasano’s talent may not come as a surprise to those who have heard of his father, the noted composer Franco Fasano. While musical talent clearly runs in the family, the older Fasano is happy that his son has achieved success on his own merit, pointing out that “Alberto Simone was enchanted by the potential of another artist, without either of them knowing about the other.”

Fasano’s father and Simone said they had received numerous requests from other young musicians who hoped for a similar endorsement. “But we don’t know how to reply because nothing was planned – three million views isn’t something you can plan,” said Fasano senior.