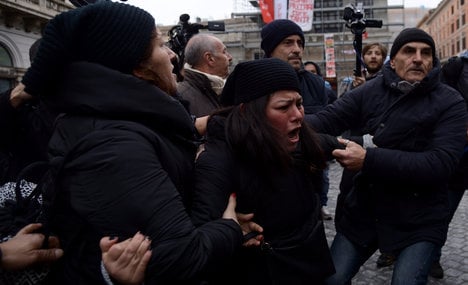 Italian police clashed with squatters who are being evicted during the Catholic 'Year of Mercy'. Photo: Filippo Monteforte/AFP

Uniformed and plain-clothes officers scuffled with members of RAM, the acronym of the Metropolitan Housing Resistance group which organised the protest, and its spokesman said nine people had been detained.

Demonstrators held a sit-in atop scaffolding on a building opposite Rome's prefecture and hung banners reading “Stop evictions” and “We are not terrorists”.

In the street below, some 100 Italians and foreigners called for Rome to address a growing housing crisis.

“Every day there are between 30 and 50 families in Rome put out on the street,” said Omero Lauri, 51, RAM spokesman.

“The situation has got much worse recently with the excuse of terrorism,” he said, with fears of jihadist violence since the Paris attacks last year leading to heightened concerns over undocumented people living off the radar.

But Alejandro Moncada from Equador, 35, said security issues were just an excuse to intensify evictions.

“The irony is that it is the pope's Year of Mercy,” he said, in reference to a special Jubilee year called by Francis from December 8th, during which pilgrims are urged to dedicate more time to merciful acts and helping the disadvantaged.

“This year should be about helping the weak, not treating us like terrorists,” said the father-of-one, who has been in Italy for 12 years along with his wife and parents, but struggles to find work as a cleaner.

Campaigners last year said forced evictions of ethnic Roma in particular in the Italian capital had more than tripled since Francis announced the special “year of mercy”, which sent the city on a clean-up spree.

According to the latest available figures from the Interior Ministry, some 36,000 families were expelled from their homes in Italy in 2014, and the number of evictions has risen by 69 percent since 2005, largely because of the economic crisis.

An investigation by Italy's Panorama magazine put the number of lodgings lying empty in 2014 in the Italian capital at 50,000 units. According to Rome city council figures, at least 90 such properties were occupied by squatters.