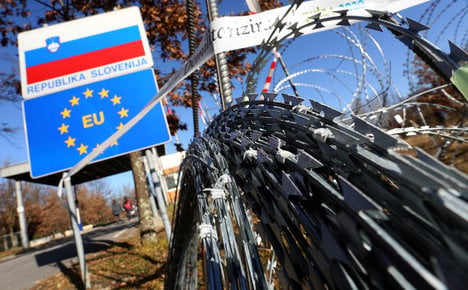 Italy is considering stepping up controls at its border with Slovenia. Photo: Stringer/AFP

As the migrant influx continues in Italy's south, concern has mounted over the increasing number of people arriving from Slovenia, which is part of the Schengen area, with between 300 and 400 arriving each week, Corriere della Sera reported.

The number has grown substantially since northern European countries, notably Sweden and Denmark, took the decision to close their borders late last year, with government sources telling the newspaper that the Italian goverment is considering stepping up controls along the border with Slovenia.

As part of the stricter controls, police would be dispatched to carry out checks along road and rail border crossings into Italy, Corriere reported.

If enacted, the move would represent another blow for the controversial Schengen agreement, which allows for the free movement of people between 26 European countries without the need for passport and border controls.

“Many other states don't register all of the migrants who arrive and yet we [Italy] are the ones who get sanctioned for it.”

Alfano was referring to possible sanctions against Italy, Greece and Malta for flouting criteria laid down by the EU regarding the registration of asylum seekers.

Under current EU rules, asylum seekers must be registered, identified and fingerprinted in the first EU country they arrive in.

As well as rules governing registration being flouted, a pact announced in September that was supposed to see thousands of asylum seekers in Italy relocated to other EU countries has so far flagged.

The pact stipulated that some 80 migrants would be relocated each day until a total of 50,000 had been moved on. But after three months just 190 had been relocated with a further 50 expected to follow by January 15th.