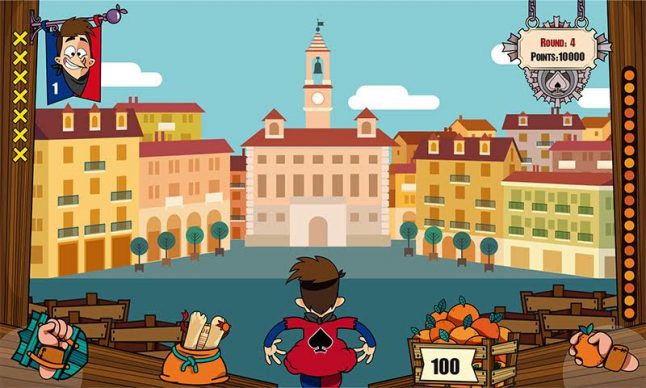 Ivrea's battle of the oranges is now a computer game. Photo: C3Studio

The game has been produced by Ivrea-based company C3Studio, which hopes the release will lead to them getting more work designing games.

“We decided we wanted to do more game design and so it's kind of a first test and a way to show off our skills,” company owner, Marco Cocchi told The Local.

Obviously, hailing from Italy's alpine city of Ivrea, in Piedmont, the choice of subject matter for the game was straightforward: Italy's largest food fight. “Being from the city, we thought the orange battle would make a good game. We have had a lot of interest from people locally but we think it has all the characteristics to be an international hit too.”

'Orange Battle' is a game set in the squares of Ivrea, which allows players to test their orange- throwing skills, while waging war for one of the nine teams that compete in the orange battle each year (Picche, Morte, Tuchini, Scacchi, Arduini, Pantere, Diavoli, Mercenari and Credendari).

To complete the game users must complete all 52 levels – a number which reflects the number of carriages that roll through the cobbled streets and squares of Ivrea lobbing oranges each year during the battle – while avoiding picking up too many bruises and black eyes from the airborne fruit.

The challenge of the game closely matches the reality of the battle, in spite of its cartoon graphics.

“I'm 41 and have been taking part in the event for 27 years, always for my team, which is Picche,” Cocchi explained. “Over the years I've had a few black eyes – but then again, who hasn't?”

The game, provisionally set for release on January 18th, will be available for download online and can be played on smartphones and tablets if downloaded from the iTunes store.

'Orange Battle' recreates the city's famous annual three-day orange war, said to commemorate the overthrow of an evil baron who suppressed the citizens of Ivrea in the 12th century.

Legend has it that the revolution was sparked when the baron tried to rape a miller's daughter on the night of her wedding to a townsman by exercising his sexual rights through a feudal law known as “jus primae noctis.”

Outraged by his demands, the young woman beheaded the baron and the townsfolk destroyed his castle, which was never rebuilt.

Initially, the citizens of Ivrea – who are known as Eporediesi – commemorated the event by throwing beans and confetti. But in the 19th century, the commemorations descended into a full-on orange war when young women started throwing oranges at coaches from their balconies to try to attract the attention of the town's eligible men.

Today, the battle is an intense three-day event involving the nine teams hurling oranges at each other. Most participants fight on foot but some of them aim their citrus fruits from horse-drawn carts.

Oranges do not grow in the Alpine town, so for the event some 270,000 kilograms are ordered in from Sicily.

The three-day battle attracts thousands of spectators, who are advised to wear a red hat unless they want warring sides aiming oranges at them.

This year's battle will take place from February 7th to 9th.