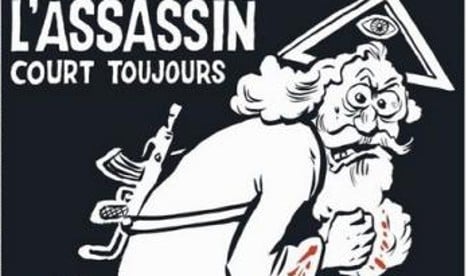 A million copies of the special edition are to hit France's newsstands on Wednesday. Photo:

A million copies of the special edition are to hit France's newsstands on Wednesday with a cover featuring a bearded man representing God with a Kalashnikov slung over his shoulder, accompanied by the text: “One year on: The murderer is still out there.”

In a commentary, the Vatican daily Osservatore Romano said treatment of this kind towards religion “is not new” — and stressed that religious figures have repeatedly condemned violence in the name of God.

“Behind the deceptive flag of uncompromising secularism, the weekly is forgetting once more what religious leaders of every faith unceasingly repeat to reject violence in the name of religion — using God to justify hatred is a genuine blasphemy, as Pope Francis has said several times.”

The commentary added: “In Charlie Hebdo's choice, there is the sad paradox of a world which is more and more sensitive about being politically correct, almost to the point of ridicule, yet does not wish to acknowledge or to respect believers' faith in God, regardless of the religion.”

The special edition will mark a year since brothers Cherif and Said Kouachi burst into Charlie Hebdo's offices in eastern Paris and killed 12 people, including eight of the magazine's staff.

The January 7, 2015 attack, claimed by Al-Qaeda's branch in the Arabian Peninsula, came after a 2011 firebombing of its offices that forced it to move premises.

Its staff had also been under police protection since it published cartoons of the Prophet Mohammed in 2006.

A week after the Charlie Hebdo attack, Pope Francis condemned killing in God's name but warned religion could not be insulted.

“To kill in the name of God is an absurdity,” Francis told reporters onboard the papal plane on an Asian tour.

While defending freedom of expression, he also cautioned “each religion has its dignity” and “there are limits”.

“If a good friend speaks badly of my mother, he can expect to get punched, and that's normal. You cannot provoke, you cannot insult other people's faith, you cannot mock it.”