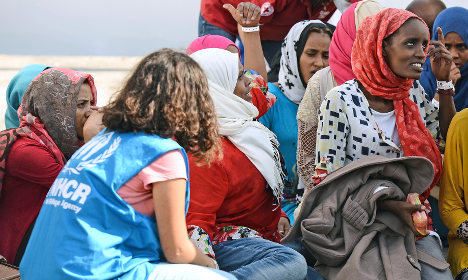 Refugees sit on the ground after disembarking from an Italian Coast Guard patrol vessel in the port of Pozzallo. Photo: Giovanni Isolino/AFP

A top prosecutor in Sicily, which has seen tens of thousands of migrants come ashore, on Saturday said the legislation was gumming up the Italian legal system.

“The immigration law is worthless, except to clutter the offices of the court system,” Renato Di Natale, the prosecutor in Agrigento, said in the daily La Stampa.

His office, which includes the migrant hotspot island of Lampedusa, had 26,000 illegal immigration cases in 2015 with no fines collected.

He said on Friday that making illegal immigrants subject to prosecution causes them to be less cooperative in cases targeting human traffickers.

However, after Interior Minister Angelino Alfano opposed the decree to abolish the fine, Prime Minister Matteo Renzi on Friday pushed back a hearing on the issue to January 15th.

Some voices on the left have called for caution in making any changes and the right unleashed its furore over the moves to scrap the law.

The rule is a “symbol and symbols count… Abolishing it means opening our doors to anyone,” said Roberto Maroni, who was interior minister under former prime minister Silvio Berlusconi when the measure was adopted.

“Do they understand what is happening in this world? They are crazy,” Matteo Salvini, who heads Italy's anti-immigrant Northern League party, said Friday on Facebook.

“The League will put up barricades in parliament and then in the streetswith a referendum against this shame,” he added.

Italy has taken in some 320,000 Mediterranean boat people since the start of 2014. In 2015, however, the main focus of the migrant crisis shifted to Greece with refugees from the Middle East arriving there via Turkey in much larger numbers.

Over a million migrants reached Europe in 2015, most of them refugees fleeing war and violence in Afghanistan, Iraq and Syria, according to the United Nations refugee agency.