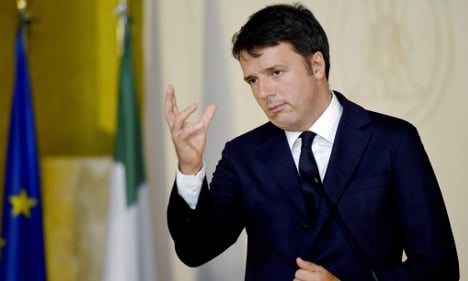 Italian Prime Minister Matteo Renzi has postponed a hearing on a bill that would decriminalize illegal immigrants. Photo: Olivier Morin

Prime Minister Matteo Renzi told Rai TV that the hearing, which was due to reach the Council of Ministers on January 15th, would no longer take place.

Renzi added that the government would “proceed calmly” with the bill, although a new hearing date is yet to be scheduled.

“Judges say the crime makes no sense and just clogs up the courts,” he said.

“But it is true that there is also a perception of insecurity, and for this reason we will proceed calmly with this process in changing the rules, all together, without haste.”

The new bill would see illegal immigrants no longer tried or liable to paying a fine of up to €10,000 for entering the country without proper documents or overstaying their visa.

It is part of the government’s drive to ease prison overcrowding as well as give migrants better protection against exploitation by black-market employers.

Renzi added that “Europe needs a common position” on the refugee issue.

“No to demagogy but also no to exaggerated goodness – those who make a mistake must be sent away.”

Illegal immigration was criminalized by Silvio Berlusconi’s government in 2009, a move which has since been widely criticized for stigmatizing migrants and leaving them vulnerable to exploitation.

Renzi has long advocated overturning Berlusconi's law. But the new bill unleashed a furore from the far-right, with Matteo Salvini, the leader of the Northern League, describing those backing it as “crazy”.

Roberto Maroni, who was interior minister under Berlusconi when the measure was adopted, said abolishing the rule means “opening our doors to anyone”.

But a top prosecutor in Sicily, which has seen tens of thousands of migrants come ashore, argued that the current legislation was gumming up the Italian legal system.

“The immigration law is worthless, except to clutter the offices of the court system,” Renato Di Natale, the prosecutor in Agrigento, told La Stampa.

His office, which includes the migrant hotspot island of Lampedusa, had 26,000 illegal immigration cases in 2015 with no fines collected.

In 2015, however, the main focus of the migrant crisis shifted to Greece with refugees from the Middle East arriving there via Turkey in much larger numbers.

Over a million migrants reached Europe in 2015, most of them refugees fleeing war and violence in Afghanistan, Iraq and Syria, according to the United Nations refugee agency.