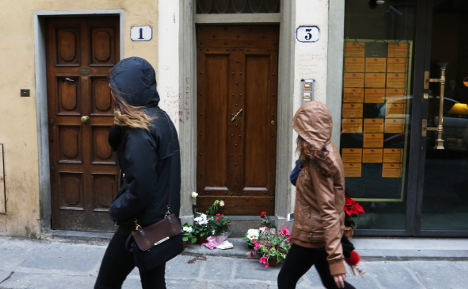 Two women walk past the entrance to the building that houses the flat of Ashley Olsen, a 35-year-old American expatriate artist who was found dead on January 9th. Photo: Claudio Giovannini/AFP

Florence's chief prosecutor Giuseppe Creazzo also said autopsy had not given any indication that Ashley Olsen, 35, had struggled with her killer, according to the AGI news agency.

The outcome of the autopsy is expected to strengthen investigators' theory that Olsen, an artist and event organiser who lived in the Tuscan city, knew her attacker.

Police found no evidence of a break-in when her naked body was found at noon on Saturday, more than 24 hours after she was last seen by friends at a late-night bar in the early hours of Friday morning.

Her body was discovered by boyfriend Federico Fiorentini, an Italian artist, who is also her landlord. He reportedly raised the alarm after becoming concerned he had not heard from her for three days after the pair had rowed.

Fiorentini provided police with an alibi on Monday and is not under investigation, Italian press reports said.

The autopsy was unable to establish the precise time of death with the experts putting it between the early hours of Friday and Saturday morning.

The prosecutor has ordered further tests to establish whether Olsen had had sex prior to her death and whether she had taken any drugs.

The murder investigation has generated a high level of interest in Italy and beyond following a lengthy legal saga surrounding another American expat in Italy, Amanda Knox, who was acquitted last year of involvement in the 2007 murder of her British flatmate Meredith Kercher.