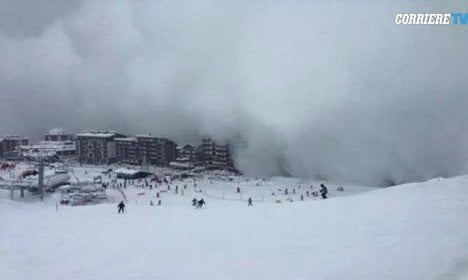 Residents of Cervinia, a hamlet of Valtournenche in Valle d'Aosta, were given a scare when the 300-meter wide slab of fresh, powdery snow broke off from the slopes of Jumeaux, a 3,800-meter mountain overlooking the town, La Stampa reported.

Fortunately, the mass of snow ran out of momentum before it could reach the hamlet.

Nonetheless, the avalanche generated a gigantic white cloud which wafted over the town, blotting out the sun for minutes.

The event was captured in photos by staff at a ski school overlooking the town, which can be seen in the video below.

“Everyone who witnessed it was really scared but fortunately there was no damage to homes or roads,” the mayor of Valtournenche, Deborah Camaschella, told La Stampa.

Camaschella also explained that although an avalanche had been expected, the event had been too close for comfort.

“We were expecting avalanches in the area, given the amount of snowfall we have been having, but nothing too serious,” she added.