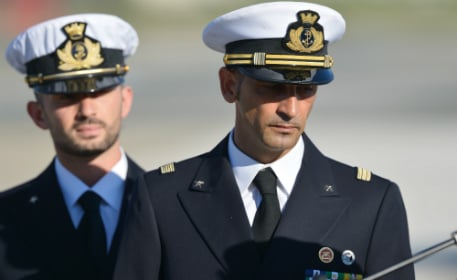 Massimiliano Latorre (R) has been granted permission to stay in Italy until April 30th by an Indian court on account of his poor health. Photo: Vincenzo Pinto/AFP

Massimiliano Latorre and his fellow marine Salvatore Girone shot the fishermen while serving as part of an anti-piracy mission off India's southern Kerala coast in 2012.

The incident strained relations between Rome and New Delhi, and both marines were barred from leaving India pending trial.

But Latorre was finally allowed to travel back to his country in 2014 for medical treatment after he suffered a blood blockage in his brain.

The court on Wednesday extended Latorre's stay until April 30th, accepting the Italian government's plea for more time because his health has deteriorated.

In August, a UN tribunal ordered India to halt court proceedings against the pair, but rejected Rome's request for both marines to be freed immediately pending a final ruling by the international body.

The detention of the marines and the long delay in the case is a sore subject in Italy with Prime Minister Matteo Renzi's government frequently being flayed by the opposition over its failure to bring both men home.

India argues that the case is not a maritime dispute but “about a double murder at sea”, in which one fisherman was shot in the head and the other in the stomach.