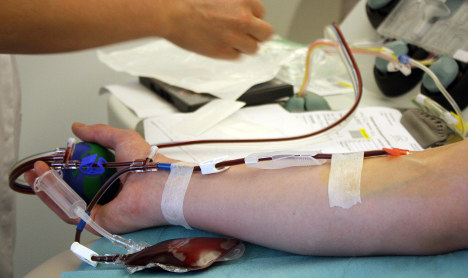 Italy must pay a total €10 million in compensation to over 350 people who were infected with various viruses through blood transfusions. Photo: Ana Aravelo/AFP

The complainants were infected with either HIV, hepatitis B or hepatitis C through transfusions during treatment or surgery for either haemophilia or thalessamia, the court said.

“The causal link between the transfusion with infected blood has been proved,” the court said, adding that the complainants were entitled to compensation totalling €10 million between them.

It is unclear from the Strasbourg court’s ruling when the complainants were infected, but some of the cases lodged date back to 1999.

According to Politrafusi, an Italian association for those who have undergone blood transfusions, 2,605 people were injected with contaminated blood between 1985 and 2008. Most of them had been receiving treatment for haemophilia or thalessamia, which both require regular blood transfusions.

Meanwhile, the British government last year pledged release £25 million (€33 million) in funds to compensate to over 3,000 people infected with HIV or hepatitis through blood transfusions in the 1980s. The scandal first emerged in 2007.