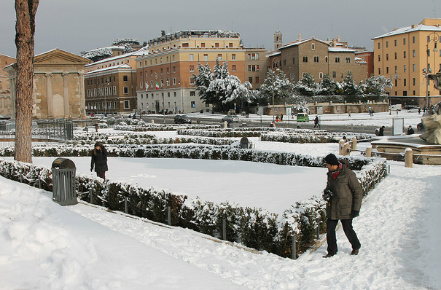 Italy is bracing itself for snow and freezing temperatures this weekend. Photo: Roberto Volterra/Flickr

So far, the winter has been exceptionally mild: a trend which is expected to last until Friday, with nighttime temperatures staying in double figures and reaching highs of 20 degrees Celsius in Sicily.

But over the weekend atmospheric temperatures across the country will plunge by some 15 degrees Celsius – a change that will bring wind speeds of up to 100kph, hailstones and snow across central and southern Italy.

Italy's northern regions will escape the bad weather, remaining icy but dry. Temperatures of -4 degrees and sunshine are forecast for for Milan and Turin. But for the south it will be a very different story.

Snowfall is expected on Saturday across the regions of Umbria, Lazio, Basilicata and Calabria in areas as low as 300 meters above sea level. Hats, gloves and scarves will be required, with temperatures in southern cities dropping as low as – 2 degrees Celsius in Rome, -3 in Florence and -1 in Naples.

As temperatures continue to fall over Saturday and into Sunday, further snow is forecast for hilly areas of Puglia and Campania. But it won't just be snow and ice across the south.

The freezing weather will bring strong winds, sleet and rainfall – with northeastern Sicily and Calabria bracing themselves for violent winter storms.