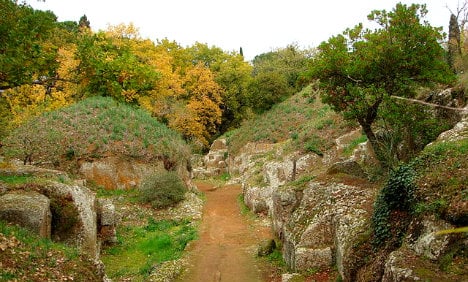 Switzerland has given Italy back treasures removed during illegal excavations from Etruscan sites such as tombs. Photo: Mike Wilson/Wikimedia Commons

“The antiques were given back to Italian authorities today,” a statement from Geneva's public prosecutor's office said.

Italy had asked the wealthy Alpine country for assistance in 2014 to track down a stolen Etruscan sarcophagus that was believed to have transited through the toll and customs-free zone that makes up the Geneva Free Ports.

“The search led by prosecutor Claudio Mascotto … at the Geneva Free Ports revealed an unexpected treasure,” the statement said.

Two rare Etruscan earthenware sarcophaguses, with beautifully sculptured lids representing a reclined man and woman, were found in a warehouse at the Free Ports, along side “many other invaluable archaeological remains”.

“The prosecutor ordered the seizure of the sarcophaguses first, then extended the decision to all items, considering their suspected illegal provenance,” it said.

Among the items were delicately painted bas-reliefs, vases and fragments of decorated vases, frescoes, heads, busts, and several other votive or religious pieces, it added.

The mysterious, seafaring Etruscan civilization ruled swathes of the Mediterranean until it was swallowed up by Rome in the first century BC.

The antiques had been brought to Geneva by a former high-profile British art dealer, previously linked to trading looted antiquities, the prosecutor's office said, without divulging the art dealer's name.

The artefacts had remained stored in the warehouse for more than 15 years, registered under the name of an offshore company, it said.

An Italian expert had concluded that the artefacts came from illegal excavations mainly carried out in the Umbria and Lazio regions, and Italian investigators linked some of the items to so-called tombaroli, or tomb raiders, they already had in their sights.