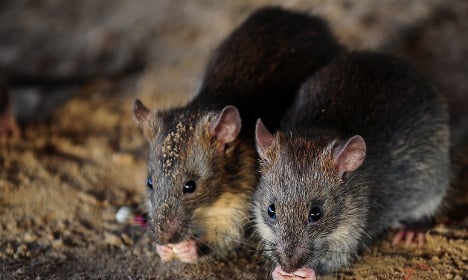 You are never more than a few metres away than a rat, the saying goes, and Rome's rodent problem is particularly well-documented.

In 2013, the city invested €400,000 in tackling rats, but the measures didn't deter the hardy beasts; in November 2014, hearings were halted at Rome's Court of Appeal due to an infestation, and this July, some ten to 20 rats were sighted at the Trevi Fountain each night.

And over the past week, the problem has reached chronic levels. Multiple sightings of rats in the city centre – sometimes in large groups, even in broad daylight – have sparked panic about the effect on local businesses, the effect on the city's image, and potential health risks posed by the animals.

A restaurant owner in the historic centre of Rome, close to tourist hotspot Piazza Navona, told Il Corriere that “on Saturday evening the whole street (Via Carallo) was invaded by rats. We were afraid to set foot on the street. We were very careful to keep entrances closed, out of fear that animals could get into the restaurant”.

Last weekend, the nearby Baguetteria Fico closed early at 8pm, citing fear that nocturnal rodents might get into the shop after dark.

One of the shop's two owners, Marco, told Il Corriere: “I also helped a lady to cross the street, who was terrified of them. There were dozens and dozens of them and they ate from the rubbish, not bothered by us as we watched them astonished.”

Marco added that he had raised the problem with local authorities on Tuesday evening. “They reassured us that as soon as possible the whole area will be 'de-ratted', but we believe the problem is really huge. They come out of holes between the cobblestones and the gaps between the street and buildings.”

It is impossible to know for certain how many rats call the Eternal City their home, but La Repubblica newspaper cited research putting the numbers of the rodents at over six million – twice the number of residents in the capital.

Anticimex, a global leader in pest control, announced that they had seen a dramatic 45 percent increase in requests for rat extermination in Rome between 2014 and 2015 as the fearless animals seem increasingly prepared to approach humans.

Assotutela, a 'citizen's protection' organization representing companies, entrepreneurs, pensioners and disabled people, has produced a video revealing the extent of the problem.

Their video, embedded below, claims to show “a real and proper invasion of rats, dozens of them in the bins in front of Castel Sant’Angelo, in the vicinity of Saint Peter’s”. In a statement, the organization emphasized the risk of illnesses and infections which might be spread by the rodents

Assotutela also said they would pass on the video to prosecutors in Rome to assess if any crimes had been committed by what they called the city's “absent administration”.

Italy's sudden drop in temperature after a mild December could be the reason for the huge number of rodent sightings, according to Valeria Paradiso from Anticimex.

“There are three kinds of rats in Rome,” Paradiso told La Repubblica. “The domestic rat, the sewer rat – the most populous – and the black rat.

“As temperatures drop, the phenomenon of migration to urban centres increases. What’s more, if there is no proper management of municipal waste, rodents – which are tablemates of man – move closer to the city.”

However, Elizabeth Lamberti, who works in the technological side of Anticimex, pointed out that technology is starting to catch up with the beasts.

“Rome has always had a struggle with the problem of mice and rats, and lately is recording more and more frequent cases of sightings in the streets of the city centre,” she said. “For effective results, today you can resort to technological solutions which respect the environment. (There is no more need for) dangerous and invasive products, (instead you can use) interactive traps powered by solar panels, able to alert you to catches in real time with a text message or email.”