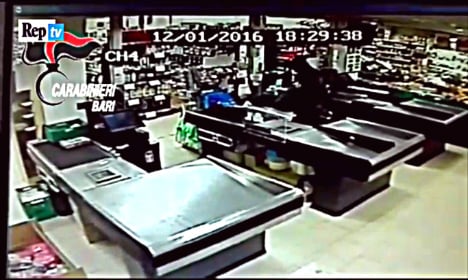 The incident happened in the town of Bisceglie, on Puglia's Adriatic coast, when an armed robber entered a supermarket with his face covered and brandishing a kitchen knife, La Stampa reports.

The man threatened the cashier at knifepoint and forced her to hand over the draw of the cash register, which contained €380.

But as he tried to escape with his loot he was chased down by the Nigerian asylum seeker, who was working outside the supermarket helping shoppers transport their groceries to their cars in exchange for small change.

As the man attempted to make his getaway, the young Nigerian gave chase, causing the would-be robber to drop the draw of the cash register. The man then turned his knife on his pursuer, but instead of backing down, the asylum seeker, from Nigeria, wrestled with the criminal and managed to disarm him.

The man then managed to wriggle free and reclaim the money before jumping on to his scooter to make an escape. However, during the tussle, the Nigerian had removed the bandanna he was using to cover his face.

Thanks to that intervention, police were able to use footage taken by a nearby CCTV camera to identify the would-be robber as a 31-year-old Italian from the nearby city of Molfetta, who was a well known to the forces for previous offences.

Police reported they had also managed to recover a portion of the money the thief had taken.