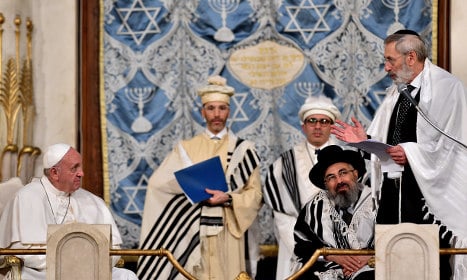 Located just across the River Tiber from the Vatican, it stands in an area still known as the Ghetto where under the orders of some of Francis's predecessors, Jews were confined for more than three centuries until their emancipation at the end of the 19th Century.

Evoking “the unbreakable bond between Jews and Christians,” the pope delivered a message of peace.

“Violence against men is in contradiction with any religion worthy of the name, and in particular the big monotheist religions,” he said.

The pope was greeted with applause as he arrived and was met on the synagogue steps by Rome's chief rabbi Riccardo Di Segni.

Francis in turn greeted some 1,500 invited guests who filled the religious site to witness the pontiff's visit.

After the deadly attacks in Paris in November, claimed by the Islamic State group, security for the pope's visit is particularly tight, with basements in the area around the synagogue searched, dustbins sealed and parking banned.

Fears of a Paris-style assault in Rome have seen visitor numbers fall, while soldiers with automatic rifles have become a common sight around the city's historic centre.

Ties between the Christianity and Judaism, which improved under both John-Paul II and Benedict XVI, have become warmer still under Francis, who has a long-standing friendship with Argentinian rabbi Abraham Skorka, with whom he jointly published a book of conversations about issues of ethics, morality and faith.

As part of his visit, the pope will view two commemorative plaques in the synagogue's gardens, one marking an incident in 1943 when more than 1,000 Jews were rounded up and deported to the Nazi death camp of Auschwitz and the other a 1983 attack on the building that left 37 injured and one dead.

Earlier in the day, the pope welcomed 5,000 migrant worshippers at a special mass at St Peter's to mark the world day of migrants and refugees, urging them to treasure their “culture and precious values”.

“Your presence here at this square is a sign of hope in God. Don't let yourselves be stripped of this hope and joy of living,” he said at the close of his weekly Angelus prayer.