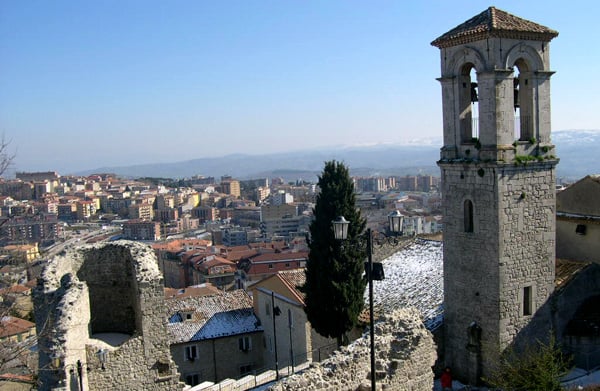 The region of Molise has been hit by more that 50 eartquakes over the last few days, all centred around the city of Campobasso, pictured above. Photo: Emmin/Wikimedia

While nobody was seriously hurt and there wasn't any severe damage to property, the earthquakes measured over the magnitude of 2.0 on the Richter scale.

But all the quakes had epicenters just a few kilometers from Campobasso, which frayed the nerves of residents in the area, Ansa news reported

The largest of the tremors came on Saturday, when a 4.3 magnitude quake caused people to hurriedly evacuate their buildings and rush onto the street in spite of the freezing temperatures and snow.

Since then, there has been little respite for residents. Another quake of 3.6 was registered just after 11pm on Sunday night and was strongly felt by locals, especially those living on higher floors.

Both citizens and local councils are using social media to spread the latest news and stay up to date as they anxiously wait for the tremors to stop.

Following the quakes, president of Molise, Paolo Frattura, called an extraordinary meeting with local mayors in the region around Campobasso on Sunday.

Schools were closed in the region's capital and 60 surrounding towns on Monday so that the structural integrity of buildings could be checked. Lectures were also suspended at the University of Molise.

The region is no stranger to earthquakes. On October 27th 2002, 27 schoolchildren died during a quake of 6.0 magnitude which caused the roof of a school in the town of San Giovanni di Puglia to collapse: an event still strong in the memory of Molise's inhabitants.

“The cluster of earthquakes appears to be a gradual release of energy,” Domenico Angelone, a member of the National Geology Council, said.

“But that does not exclude events of a larger magnitude or duration. We're inviting all local administrations to carry out checks and protect vulnerable structures. These quakes have caused a great amount of worry among the population, who have not forgotten the earthquake of 14 years ago,”  Angelone added.