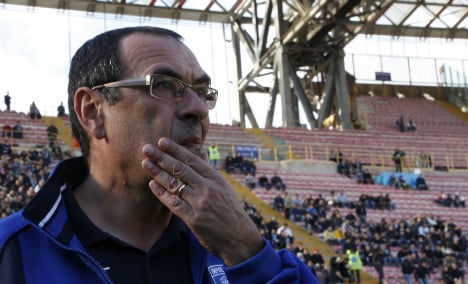 Sarri has steered Napoli to the top of Italy's top flight and the side are firmly in title contention 26 years after winning their last 'scudetto'.

But the 57-year-old hit the headlines for all the wrong reasons on Tuesday when he called Inter Milan coach Roberto Mancini a 'poof' during a heated dispute after his side's quarter-final cup defeat to the Nerazzurri.

Sarri, who now risks a two-game touchline ban, claimed the slurs were said in the heat of the moment.

But the controversy has overshadowed Napoli's brilliant first half of the season and left Sarri, who has transformed Napoli from also-rans to title contenders, with egg on his face.

Alessandro Cecchi Paone, the president of fifth division side Positano, close to Naples, labelled Sarri's slurs as “offensive and homophobic” and suggested Napoli organize a benefit match between the sides to help spread awareness of the issue.

But Paone said gay players, coaches or officials could make a bigger impact by coming out themselves.

The 54-year-old announced he was gay 18 months ago and said he has earned nothing but respect.

“Everyone gives me credit for having the courage to admit I was gay. Now would be the time, in Serie A, for a coach, player or official to come to terms with his own homosexuality and become an example to follow,” Paone said in Gazzetta dello Sport.

“Mancini has jolted a climate that effectively prevents players from declaring their homosexuality because these kinds of homophobic incidents, that I see all the time in the minor leagues, don't get the publicity they deserve.”

While Sarri awaits the announcement of a possible ban that could hamper his side's campaign, his rant has highlighted arguably the last big taboo in football.

In 2009 Gareth Thomas, at the time Wales's most-capped rugby union player, admitted he was gay while still actively playing.

Yet gay footballers remain a rarity at the top level of the sport.

Englishman Justin Fashanu was the first professional footballer in Britain to admit his sexuality, in 1990, but committed suicide eight years later, aged 37.

Last year former Aston Villa, West Ham and Everton midfielder Thomas Hitzlsperger announced he was gay, claiming: “I've never been ashamed of the way I am.”

In 2015 reports that two Premier League stars, one of whom was allegedly an England international, were on the verge of announcing their 'coming out' dominated headlines in Britain's tabloids.

But currently, there are no known openly gay footballers in the English and Scottish professional leagues.

Homosexuality in Italian football also remains taboo, although Juventus midfielder Claudio Marchisio won fans among the LGBT (Lesbian, Gay, Bisexual, Transexual) community several years ago when he said it was “not fair” homosexuals should be accepted elsewhere and not in football.

He told the Italian edition of Vogue magazine in June 2012: “If someone comes out at their place of work, thankfully now it no longer causes controversy.

“But if you do that at a football training camp, the reaction wouldn't be the same. It is not fair.”

Paone, meanwhile, said his candour on the subject has only boosted his club's chance on the pitch.

“Things are going great, I have great relations with the players and there's no problem about me going into the dressing room,” he added. “What's more, the team is playing even better.”