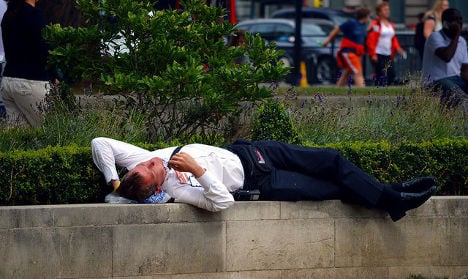 The staff shirked work to engage in more appealing activities (the man in the photo is not one of them). Photo: Bill Smith

The seven allegedly abandoned their work duties each day to engage in more appealing pursuits, such as shopping, hunting or simply returning home after clocking on, Ansa reported.

The group, which included a manager and six staff from the town’s agriculture department, were caught on camera turning up to work each day, only to promptly leave.

The investigation revealed that seven out of 12 staff members were arbitrarily away from their work posts.

The charges come amid a crackdown by the Italian government against public sector shirkers, in what premier Matteo Renzi said last week was “intolerable”.

Employers who turn a blind eye to time-stamp swindlers also “risk being sent home too”, Renzi said, as part of a new government bill.

While there are laws in place to tackle the so-called “cunning card” phenomenon, government data showed that in 2013, just 219 employees found guilty of cheating were fired out of nearly 7,000 cases.

The problem of time clock dodgers hit the front pages in October last year after 35 people were arrested in San Remo, in northwest Italy, and 195 people were placed under investigation for absenteeism.

Traffic police officer Alberto Muraglia, 53, who lives in the same building he works in, was secretly filmed by financial police as he clocked in in his underwear before apparently going back to bed. His wife was also filmed clocking in some days on his behalf, in her nightie.

Others were caught on camera clocking in and then going canoeing, shopping or out with friends. Some of those caught complained last week that “there wasn’t enough work to do”.

Earlier this month, nine staff at a museum in Rome were suspended after being caught swindling the time management system.