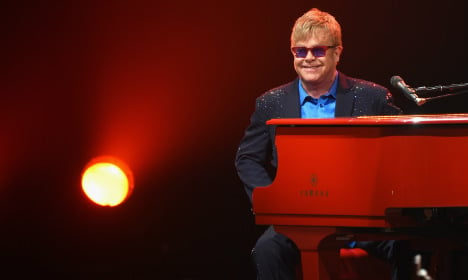 Maurizio Gasparri said the star was a “vile person” and that his use of surrogate mothers was “vile”.

“With wombs for rent it's easy to arrive at eugenics and Naziism,” he told Radio 24.

The 'Rocket Man' singer has two sons – Zachary, four and Elijah, two – with his partner David Furnish. Both boys were born using a surrogate mother, an issue which has taken centre stage as Italy prepares to debate its civil unions bill on Friday.

“What he did was the selfishness of a rich, arrogant man who exploited other people's desperation,” continued Gasparri – echoing comments earlier this month by Italy's Interior Minister, Angelino Alfano, who branded surrogacy “a sex crime“.

The potential right of same-sex couples to use surrogates to have children is being fiercely opposed by those who don't want to see the bill passed.

In a move branded “indecent” by Italy's biggest gay rights group, Catholic senators from Prime Minister Matteo Renzi's DemocraticParty last week tabled an amendment to draft legislation legalizing same-sex unions which would require gay couples to prove they had not used a surrogate.

If they cannot, the partner who is not the biological father would not be allowed to adopt the child and a judge would be entitled to have the child placed in care and put up for adoption.

The amendment also envisages prison terms of up to two years and fines of up to €1 million for using a surrogate overseas, regardless of whether the practice is legal in the country concerned. Similar penalties are already in place for anyone entering a surrogacy arrangement in Italy.

Sir Elton is rumoured to be performing at Italy's most prominent music festival in San Remo in February.

But Gasparri warned him to keep a low profile should he take part.

“If he does come to Sanremo, he should stick to singing and not try to be the guru of surrogacy,” the minister said.

This is by far the first time that Gasparri has hit the headlines with rash comments.

Earlier this month he was ridiculed online after confusing the late Jim Morrison with a non-existent Slavic criminal terrorizing Italy.

Last year, Sir Elton was involved in a public spat with Venice Mayor, Luigi Brugnaro, who he branded “a bigot” after the mayor banned books depicting same-sex couples in the region's schools.

Sir Elton is yet to respond to Gasparri's comments.