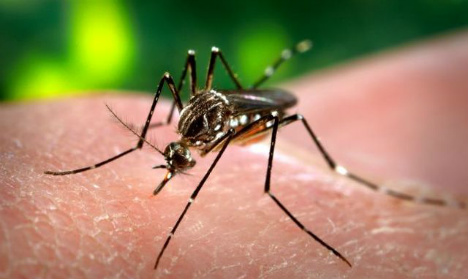 Four cases of the Zika virus have been confirmed in Italy. Photo: James Gathney/Wikmedia

The Zika virus is normally transmitted by the bite of an infected mosquito, Aedes aegypti – a variety which is widespread across tropical regions of Latin America, Africa and southeast Asia, La Repubblica reported.

But the disease is on the rise globally and new cases are popping up around the world, with four cases being confirmed in Italy, two in Spain and three in Britain.

Experts say the virus is not dangerous and cannot be transmitted from human to human. Symptoms are fairly mild and include headache, rash, fever, joint pains and conjunctivitis.

However, some experts think that if pregnant women become infected during the first trimester it can lead to their children developing a condition known as microcephaly. This means children are born with heads that are too small, which often leads to serious developmental problems.

So far, all reported cases of the Zika virus in Italy have been found in people who have recently returned from Latin America and the Caribbean. But experts warn the disease could potentially be spread in Italy by the Tiger Mosquito –  an insect once native to Asia, but now widespread across southern Europe.

“The disease could be carried by the Tiger Mosquito. A couple of years ago a similar thing happened near Rimini when a tourist brought back another tropical virus known as Chikungunya,” Fabrizio Pregliasco, a virologist at the University of Milan told La Repubblica.

“The infected patient was then bitten by a Tiger Mosquito, and the Chikungunya virus was spread to over 200 people.”

The potential for a Zika outbreak in Italy has caused concern, not least among the country's pregnant women.

In the past, an average of 150 children were born afflicted with microcephaly each year in Brazil  – but after a Zika epidemic last year the number of cases reported between October 2015 and January 2015 was 3,500. The government of Colombia, where the disease is currently rampant, is advising women not to get pregnant.

Pregliasco said that it was important that Italian health authorities worked to stop a the Zika virus spreading in Italy.