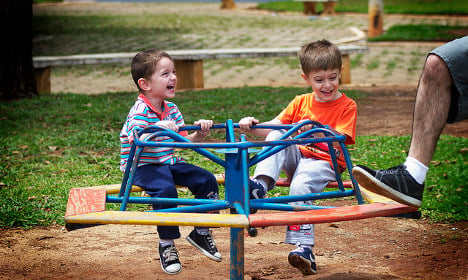 Perhaps the children's complaints at being kicked off the swings will finally achieve what no amount of government crackdowns or letters has been able to – persuade the tax dodgers to pay up.

That seems to be the idea of Michela Rosetta, the mayor of San Germano Vercellese, a small village of around 1,800 inhabitants, which has a tax deficit to the tune of €100,000, La Stampa reported.

“Taxes are used to finance services, and those who don’t pay, don’t have the right to use them,” the mayor said.

Italy is determined to crack down on tax evasion, investigating big names such as top national footballers and McDonald’s.

But private individuals are much harder to target than large corporations, which could be why the mayor is tackling the challenge with more imaginative measures.

Other measures include no longer handing out free rubbish bags, stopping waste collections and refusing children school dinners unless their parents have paid.

The authorities are well aware of who has neglected to pay their taxes, compiling an “anti-dodgers” dossier containing 180 names. Each has received a warning letter, La Stampa said.

“We have mediated with many families in difficulty, deferring the payments,” Giorgio Carando, a city councillor told the newspaper, adding that those who had not cooperated shouldn’t be able to benefit from services until they did so.

But while tracking down the families who aren't abiding by the rules may be simple, keeping them away from public services may prove trickier.

The mayor explained: “We don’t want to impose bans, but we want to teach respect for public affairs.”

However, some groups within the community have complained that the move will lead to segregation.

“Among the families who have been forbidden entry to the parks, there are many of Moroccan origin,” said Aity Ahmed, president of Muslim cultural organization, Al Aman.

“It isn’t right to make the children take on the responsibilities of the parents – now they know they are not welcome.”

Ahmed has requested a meeting with the mayor and said he is ready to lead peaceful protests if the city doesn’t reverse the new scheme. “Many of us are Italian citizens, and our children too, but this isn’t the first time the mayor has discriminated against foreigners,” he said.

The mayor said that he was happy to speak to Ahmed. “My door is always open,” he told La Stampa. “But I don’t accept the talk of discrimination or racism, I only discriminate against those who don’t pay.”

Tax evasion is a huge problem in Italy; a report released last year by the European Commission showed that Italy lost out on a third of its taxes through evasion in 2013, meaning a net loss of €47.5 billion. Only Lithuania, Slovakia and Romania performed worse.

Over the past year, the Italian government has signed deals with the Vatican and Switzerland to share financial information of companies and individuals, and in December an ‘amnesty’ deal allowing taxes and assets hidden abroad to be declared resulted in a €4 million payout for the Italian government.

In 2014, the country's financial police tracked down nearly 12,000 people working off the books and over 13,000 using irregular contracts. But although 13,000 were charged with suspected tax fraud, only 150 ended up in jail.