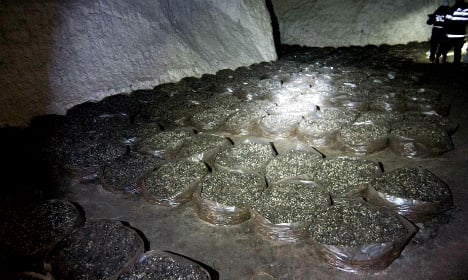 A network of ancient Roman tunnels and tombs in Rome have become an illegal waste dump. Photo: Polizia Roma Capitale

Police made the discovery on Monday in a network of ancient caves on the outskirts of the Rome.

Deep in the bowls of the ancient city's bedrock they found piles of old refrigerators, mattresses, sacks of old rubble, electronics and even dangerous industrial waste.

After making the shocking discovery, police used drones to fully explore the network of bat-and-mice-infested tunnels to try to establish the extent of the dumping.

Police have now seized the caves and are working to identify to whom the rubbish belonged so that the litter louts can be prosecuted.

The network of caves stretches under the edge of the picturesque Torre del Fiscale park and runs under two ancient Roman highways: the Appian Way and Via Latina.

Above ground, the peaceful area is home to the spectacular remains of luxury villas, aqueducts and ancient tombs.

“It's really sad. The Torre del Fiscale park is a jewel that has been recovered through many years of hard work from citizens,” a spokesperson for the park told The Local.

“The only part of the park that police sequestered was the entrance to the tunnels. We have actually been proposing to restore some of the tunnels for a while.”

But down below it's a different story.


A member of the police force gathers a jar of noxious muck.Photo: Polizia Roma Capitale

Dangerous waste now litters the expansive caves and tunnels – which were quarried by slaves into the Eternal city's bedrock. The stone, known as Tufa, was a key ingredient in ancient Roman cement.

Once quarried, certain areas within the underground network became catacombs, places where some of the very first Christians of second and third century Rome once respectfully buried their dead.