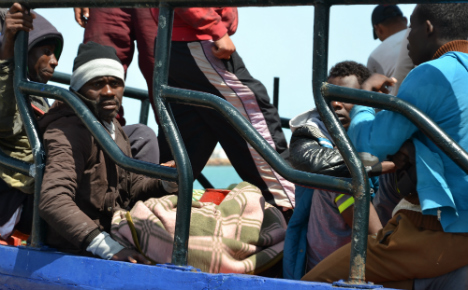 “The Aliseo ship recovered 74 migrants from a sinking dinghy along with six bodies,” the navy said on its Twitter account, adding that a helicopter was searching for any survivors that may have gone overboard.

It was not clear how the six died, but passengers killed on the dangerous route have often suffered dehydration, sun exposure or suffocation.

The navy said a total of 290 migrants had been rescued from three dinghies during the day.

Though the number of people attempting the crossing during the winter period has dropped, there is a steady flow of arrivals each week despite the rough seas and tensions in Europe over the reception of asylum seekers.

Over 2,500 people were rescued off the coast of Libya in the past week, bringing the number for January to almost 5,000, significantly more than the 3,528 people who were rescued in January last year.

While most of the one million migrants arriving in Europe last year crossed from Turkey to Greece, the route from North Africa towards Italy proved far more deadly, accounting for three quarters of the 3,770 migrant deaths in the Mediterranean in 2015, according to the International Organization for Migration.