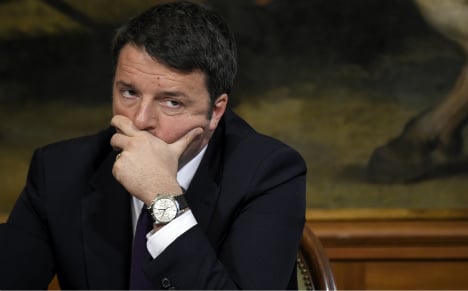 Matteo Renzi has criticized France and Germany for playing to dominant a role in EU politics. Photo: Andreas Solaro/AFP

Renzi stressed that he holds German Chancellor Angela Merkel in high esteem, but also made the case for a bigger role for Italy and other European Union members in jointly tackling European crises.

One point of contention was “Germany's attitude that all EU initiatives start with a bilateral meeting with the French,” Renzi told the Frankfurter Allgemeine Zeitung daily.

“Of course I would be delighted if Angela and Francois (Hollande) were able to solve all the problems,” he was quoted as saying. “But most of the time this is not what happens.

“If we are seeking a comprehensive European strategy to address the refugee issue, then it's not enough if Angela calls first Hollande and then European Commission president Jean-Claude Juncker, and I then read about the outcome in the press.”

Renzi, a 41-year-old who has pushed reforms to revitalize a debt-stricken economy, has in recent months repeatedly criticized both Germany and the European Commission on issues ranging from Berlin's perceived dominance to EU budget constraints to energy policy.

Merkel hosts Renzi Friday for a working lunch to discuss “the refugee crisis, the international situation and current European issues,” the chancellery said.

In the refugee crisis, Italy is a frontline state along with Greece, as the first ports of call for many fleeing war and poverty in the Middle East and Africa in perilous journeys across the Mediterranean.

Renzi called the mass influx an “epochal problem for which there are no easy solutions”.

“We are doing our part by rescuing, almost every day, children from capsized boats in the Mediterranean,” he said, while calling for an end to EU rules that oblige refugees to apply for asylum in the first EU country they enter, saying “away with it”.

Renzi pointed at Italy's economic reforms and a reduced public deficit since he took power in 2014, saying that “Italy is no longer a problem for the EU” and vowing he was “hungry for more reforms”.

“Now I can report progress in Berlin,” he said ahead of his meeting with Merkel Friday. “I have delivered, and today I can argue from a different position about points of disagreement, even if the areas of agreement dominate by far.”