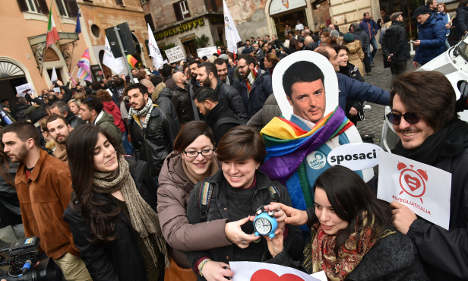 Supporters of gay civil unions during a protest in Rome on Saturday. Photo: Alberto Pizzoli/AFP

The debate has taken to the streets: tens of thousands of supporters demonstrated last weekend throughout the country, while opponents are planning a mass rally in the capital for Saturday.

While Italy is the last major Western country not to allow gay couples legal status, after years of thwarted efforts the so-called Cirinna bill, named after the senator behind it, will land in the upper house of parliament at 9:30am CET.

In 2007, a vast demonstration dubbed “Family Day” forced the centre-left government of Romano Prodi to drop a much less ambitious civil union project – and the rights campaign was cited as one of the reasons the cabinet fell in early 2008.

But supporters say Italy has no choice this time but to change. The European Court of Human Rights has repeatedly slammed the delay and Italian family courts are already green-lighting the adoption of children in some cases.

The first Senate debate will focus on potential constitutional issues, to be decided by a vote scheduled for Tuesday, before a week of debate on hundreds of amendments on the table and another to review and vote on each article.

A vote is expected mid-February, after which the text will have to go before the lower house of parliament, where negotiations are already underway to try to ensure the bill passes smoothly – avoiding a potential return to the Senate.

As it stands, the bill will enable same-sex couples to commit themselves to one another before a state official, to take each other's names and, in certain circumstances, adopt each other's children and inherit residual pension rights.

“It offers the bare minimum. If it doesn't pass as it stands now, then it might as well not pass at all,” Marco Simon Puccioni, a film director and gay father to twins with his partner of 11 years, told AFP.

For others, it goes too far. “It is unacceptable to think of our children, our grandchildren, being taught that there are different models of families,” said Massimo Gandolfini, neurosurgeon and coordinator of Saturday's new “Family Day” protest.

Pope Francis has also weighed into the debate, reminding Catholics this month that the Church rejects all forms of union outside of marriage between a man and a woman.

While centre-left Renzi says he is confident the bill will pass, there are several sticking points, in particular pension rights and the ability to adopt the biological children of one's partner.

Renzi's centre-right coalition allies, led by Interior Minister Angelino Alfano, are categorically opposed to adoption of children by a gay spouse, as is the Catholic fringe of the PM's own Democratic Party (PD).

Both camps have threatened to call a referendum if the bill passes as is.

Meanwhile, left-wing parties in the opposition and the anti-establishment Five Star movement (M5S) — whose support Renzi needs to get the bill through the Senate — are threatening to pull the plug if even one comma of the text is changed.

The premier, a practising Catholic who opposed the 2007 bill, has said the vote on the article in the bill regarding adoption will be done by secret ballot to allow conscientious objectors free rein.

In the run-up, loud media headlines have been warning the adoption issue could affect 100,000 children in Italy. The country's National Statistics Institute instead puts the figure at between 500 and 1,000 youngsters.

Some have suggested a form of shared parental authority could be implemented while the child in question is a minor, after which it would be up to him or her to say whether they wish to be adopted by their so-called “social parent”.

But the idea has sent gay rights associations into a frenzy.

The Cirinna bill is “the first step” to narrowing the gap with other countries and righting “a delay that does no honour to our country,” said Gabriele Piazzoni, national secretary of Arcigay, the country's largest such association.

And on social networks, a hashtag by activist and transsexual former member of parliament Vladimir Luxuria has been picking up traction against the secret ballot, reading: #mettetecilafaccia or #showyourface.