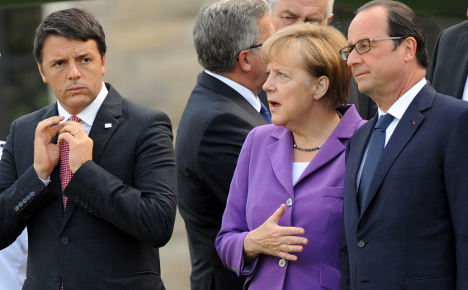 Matteo Renzi (L) says the EU is too dominated by Germany and France. Photo: Stefan Rousseau/AFP

Matteo Renzi first met the German Chancellor Angela Merkel in July 2013, back when he was mayor of Florence.

At the time, he was a virtual unknown in Italian politics, but six months later he won the race to lead the centre-left Democratic Party and by February 2014, he was appointed Prime Minister.

Riding high in the popularity sweepstakes at home, Renzi worked hard to earn Italy respect of its European neighbours, especially after the embarrassments of the Silvio Berlusconi era.

He quickly ushered in reforms to reignite the country’s debt-stricken economy and has reduced the public sector deficit within less than two years in power, earning praise from and inspiring the confidence of Merkel.

The 41-year-old has also wooed her with his charm and humour, with the elder stateswoman often caught on camera either smiling or laughing whenever she’s in his company.

The flourishing relationship led the Italian media to dub the pair “Mother Merkel and little Matteo”, especially after Renzi showed her the splendour of his home town of Florence in the summer of 2014, treating her to a private viewing of Michelangelo’s David and taking her for dinner at Palazzo Vecchio.

Merkel also revealed that each time they meet he presents her with a booklet detailing progress of his reform programme.

But after all that effort, Renzi isn’t happy about Italy being left out in the cold when it comes to tackling major EU issues – and now he's making his irritation increasingly public.

He took this to a new level on Thursday when he told German media that Germany and France were too dominant in EU politics, bravely making the case for a bigger role for Italy and other EU partners.

One bone of contention was “Germany’s attitude that all EU initiatives starts with a bilateral meeting with the French,” Renzi told Frankfurter Allgemeine Zeitung daily.

“Of course I would be delighted if Angela and François (Hollande) were able to solve all the problems,” he was quoted as saying. “But most of the time this is not what happens.”

And he didn’t stop there.

“If we are seeking a comprehensive European strategy to address the refugee issue, then it's not enough if Angela calls first Hollande and then European Commission president Jean-Claude Juncker, and I then read about the outcome in the press,” he went on to say.

Franco Pavoncello, a political science professor and president of Rome’s John Cabot University, said Renzi’s agitation is partly due to an impatience with Italy’s economy and unemployment situation.

“And he’s trying to signal that impatience in the EU, which basically means calling for a loosening of control and giving Italy more freedom,” Pavoncello told The Local.

“But at the same time he wants Italy to have more of a voice in the EU.”

Renzi has never been scared to stand up for Italy in the EU, especially over issues that he feels divide Europe, whether that be Berlin’s perceived dominance or EU budget constraints.

But Merkel hasn’t been the only one in the firing line.

Last October, he hit back at European Council President Donald Tusk after he put Italy in the same realm as Hungary as a member state which had flouted EU rules on dealing with migrants, telling Tusk the disparaging remarks were disrespectful to the Italian people, in light of Italy’s efforts to save refugees from drowning in the Mediterranean.

A year earlier he took on Commission President Jean-Claude Juncker, telling him to give Italy more respect after Juncker made a series of swipes against the EU’s third-largest economy.

But as Renzi prepares to meet Merkel in Berlin on Friday for a working lunch, commentators are questioning his increasingly confrontational approach.

“When Angela Merkel meets the man she had the far-sightedness to invite to Berlin when he had lost the PD primaries and was still only the mayor of a relatively small Italian town, she will be wondering how much power has changed him. Since that day there has been an alternation of confirmations and disappointments. Confirmations for his ability to complete reforms that others had only talked about for years; disappointments for his failure (perhaps he had never tried) to consolidate his position in the EU Council and become a point of reference.”

Pavoncello doesn’t think the motive behind his fiery tactics is a quest for even more personal power.

“He has all the personal power he can have – there is no alternative to Renzi in Italy right now,” he added.

“More than power, I think he has an agenda for reforms – he’s being asked to push for the type of structural reforms really needed to make the country more dynamic.

But while Italy's European partners are pushing for change, Renzi complains that the EU's own rules are themselves an obstacle to reform.

As one of the four founding member states of the EU, Renzi is also frustrated that Italy’s role has weakened over the past few decades, and there is a feeling that this must be overcome, with the country being included in big decisions, Pavoncello said.

One of the clearest recent signs that Renzi wants Italy to have more muscle is his replacement of the country’s ambassador to the EU last week. Carlo Calenda, Italy’s vice-minister for economic development and a close Renzi aide, took over from Stefano Sannino, who was seen as being too soft on the EU.

“There are clear messages coming from Renzi that he wants more flexibility, freedom and consideration,” Pavoncello said.

But at the same time he warned that the confrontation could be detrimental both to the EU and Italy.

“Rather than quarrelling, Renzi should present himself as leader in the EU who is capable of helping to make the EU move forward. In this respect, it’s important for Italy to be a supporter of Merkel for the renewal of the EU.”

Pavoncello also warned that a loosening of control and more freedom for Italy might backfire on the country.

“That would make control of the economy and banks a national thing, and, right now, the confidence of the markets is mitigated by EU presence, which might decline if it becomes a national affair.”