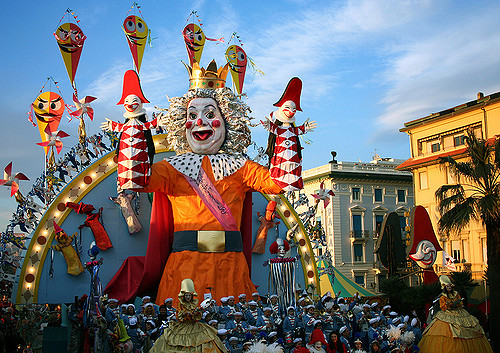 Viareggio is one of Italy’s biggest carnivals. Photo: Giulia/Flickr

The story goes that a Roman official had Saint Agatha tortured and killed after she, a devout Christian, spurned his advances. Her martyrdom, however, spawned a massive three-day festival, celebrated by all of Catania, including parades, fireworks and a mass at the city’s cathedral. Believers wander the street, wide-eyed, hoping for their own vision of the saint, while bakers join the celebration by baking special sweet treats – minni di virgini, shaped like a small breast – as part of Agatha’s torture was having her bosom cut off.

Viareggio — Carnival, every Sunday in February

One of Italy’s biggest carnivals – the traditional celebrations by Catholics before they fast in Lent – is in Viareggio, a small seaside town in Tuscany. In its 143rd year, Viareggio residents celebrate before their Lenten sacrifice with parades every Sunday in February. Hundreds of floats turn out, as well as masked participants to keep the fun anonymous. You can also expect fireworks, balls and plenty of food. However, tickets are required due to the popularity of the events, which can be purchased here.

In fair Verona the scene is laid for a weekend dedicated to love. The setting of Romeo and Juliet goes all-out to make Valentine’s Day special for its inhabitants and visitors. Even the street lights become hearts for the weekend. Bike tours, wine tastings and tours to the alleged homes of both of Shakespeare's star-crossed paramours are all planned – with special prices just for couples.

As with any Carnevale, Putignano has parades and masks galore, as all good Catholics attempt to get their worst instincts out of the way before the 40 days of Lent. But Putignano has one tradition worth seeing above other cities – a heavy emphasis on role playing. Each Thursday until the end of the festival is designated as the day of group, whether the married, the young or the priesthood. For the entire day, festival-goers are encouraged to act as one of them – for good or for ill. Who said Italians were always pious?

Italy’s – and arguably the world’s – capital of fashion is Milan, which from the 24th to the 29th will be home to the trend-setting autumn and winter styles of 2016. With more than 170 exhibitions planned in only six days, keeping up will be tough. And that’s not including the jumping nightlife sure to accompany any gathering of this size.

A unique carnival event held every year in Ivrea, a small town in Piedmont, the Battle of the Oranges commemorates the popular uprising of the townspeople some 800 years ago against an unjust Lord. Like Spain’s La Tomatina, it involves the hurling of fruit. But unlike La Tomatina, this isn’t just for fun. Nine teams, composed of as many locals as tourists, compete to deal the most pulpy damage to the armoured knights riding in carts. If not the competitive type, visitors are still welcome to view the fun – but make sure you wear a red hat so you don't become a target.

For the Tuscan chocoholic, Florence’s Artisanal Chocolate Festival is the perfect event. With paired wine and chocolate tastings, a cake decorating workshop and plenty of events just for kids, the festival is fun for the whole family.

Held annually since 1934 between the first and second Sunday in February, Agrigento, a small town in Sicily, celebrates the early arrival of spring with a week of stories and food. Sicily’s – and the world’s – best tale-spinners gather under the light pink flowers to swap folklore and eat the local cuisine. The week is usually capped with the lighting of a ceremonial torch as a goodwill message of all who came.

This is the big one. Just as New Orleans is known for Mardi Gras, Venice is known for its carnival. Nothing can compare to the pleasure of putting on a mask and cape and riding a gondola down the Grand Canal for the Grand Masquerade Ball at Palazzo Flangini, or stuffing yourself with fried treats like frittelle Veneziane, a type of pastry, on St. Mark’s square. If you can manage only one carnival trip in your life, make it Venice.

With all the debauchery before Lent, it’s easy to forget the experience that can be had as Italy starts the period. Going to any of Italy’s massive and beautiful cathedrals for an early mass on Ash Wednesday is an experience not to be missed in a country that holds religion so close to heart. Or at least, this will be a reminder not to tell your waiter they have some dirt on their forehead.