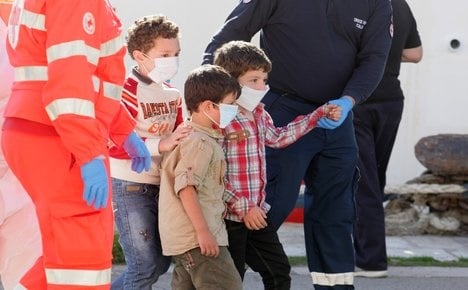 Children disembark from a boat at the Brindisi harbor, southern Italy, in September 2014. Photo: DFF/AFP

The figures, from Europol, the EU’s criminal intelligence agency, paint an increasingly distressing element of the ongoing refugee crisis, with fears that thousands of the missing youngsters could have succumbed to criminal organizations.

In an interview with The Observer, Brian Donald, the agency’s chief of staff, warned that “a sophisticated pan-European ‘criminal infrastructure’ was now targeting refugees”.

Although he said some of the missing children may have joined family members in parts of Europe, he admitted that the agency simply doesn’t know “where they are, what they’re doing or whom they are with”.

But he did say Europol had received evidence that some child refugees who arrived alone in Europe had been sexually exploited.

Of the 10,000 to have vanished, 5,000 unaccompanied refugee children are said to have disappeared in Italy, while a further 1,000 slipped through the net in Sweden.

A spokesperson for Save the Children Italy said the figures are “extremely worrying” and point to a “severe gap in Europe’s child protection systems across the whole of the route”.

“There are a lot of different reasons why refugee children in Europe are failing to be accounted for,” the spokesperson said in a statement.

“Many have not been properly identified and registered, many abscond from the facility centres they are placed in, choosing instead to make the journey on their own. These children are at high risk of becoming victims of exploitation, trafficking and other forms of abuse.”

Ferrucio Pastore, director of the International and European Forum for Migration Research in Turin, said that while the figures are worrying, he believes many of the children who have vanished in Italy chose to leave.

“Not many want to stay in Italy, so they try not to be identified,” he told The Local.

“Even if they are identified, they just leave. Many have survived such tough situations already, so despite their age they have the capacity to move on – their objective is to travel beyond Italy, maybe to find family or friends in other parts of Europe.”

His words echoed those of Virginia Giugno, the chief of staff at the town hall in the Sicilian port town of Pozzallo, a major landing point for refugees.

In an interview with The Local last summer, she said 2014 saw the highest number of unaccompanied children – around 1,000 – landing in the town, compared to just a handful in 2012.

Many of those had simply walked out of refugee centres.

“Some escaped before being systemized,” Giugno, who was appointed legal guardian for over 800 of the children, said at the time.

“Many arrived with a project to head on…to family and friends in northern Europe. Those who had been through this experience had clearly changed their outlook on life. They were brave, strong…yes, they cried for their parents, but with great dignity.”

Ranging in age from 12 to 16, they mostly came from Eritrea, Sudan, Egypt, Mali, Ghana and Ethiopia.

But another worrying trend is the rise in the number of unaccompanied children, mostly boys, arriving from Albania, Pastore said.

“Over the last two years or so, the number coming from Albania has increased,” he added.

“They come here for jobs, but unfortunately some fall into sex work or are exploited doing manual labour on the black market.”

Save the Children Italy called on EU states to work together to improve child protection systems for vulnerable children travelling on their own, including ensuring front-line countries have the adequate capacity and expertise to properly identify, register and support unaccompanied refugee children.

“It also involves ensuring effective procedures are in place to facilitate best interest assessments for children and family reunification to other European States,” the charity said.

“Ultimately, unless Europe is willing to provide safe and legal passage to refugees, it will fail in its responsibility to protect these vulnerable children and their families.”