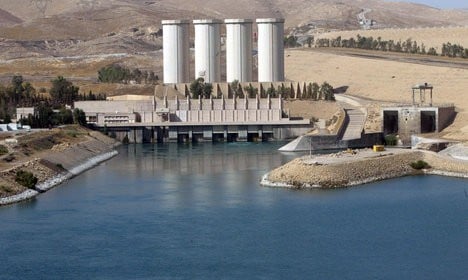 The Mosul Dam was built on an unstable foundation of soils that erode when exposed to water, and a lapse in maintenance after the Isis group seized it in 2014 weakened the already flawed structure.

The dam has long been in danger of collapse, which US officials have warned could send a huge wave crashing into Isis-held Mosul, Iraq's second-largest city, about 40 kilometres (25 miles) away.

The Iraqi cabinet, with the agreement of the Ministry of Water Resources, awarded Trevi the contract “to carry out the project of rehabilitating and maintaining the Mosul Dam,” a government statement said.

The deal has yet to be signed, according to the statement, which did not specify how much Trevi would be paid for the work.

Italy's prime minister announced in December that it would deploy 450 troops to defend the dam, a decision linked to Trevi's interest in the project.

Italian forces are already in Iraq training police as part of international efforts to counter Isis.

Italy also deployed forces to Iraq as part of the US-led coalition that overthrew president Saddam Hussein, and a truck bomb killed 19 Italians south of Baghdad in 2003.

Lieutenant General Sean MacFarland, the commander of the military operation against Isis, said last week that the US had put measuring devices on the dam to monitor how much it is “moving or deteriorating over time”.

Since the dam's completion in 1984, the Iraqi government has sought to shore up the foundation by injecting mortar-like grout into the subsoil and cavities and controlling seepage.

But that essential maintenance stopped in 2014 when Isis briefly seized the dam.

In 2007, the US ambassador to Iraq and the top American military commander in the country wrote a letter warning that the dam could fail with devastating results.

“A catastrophic failure of the Mosul Dam would result in flooding along the Tigris River all the way to Baghdad,” the letter said.

“Assuming a worst case scenario, an instantaneous failure of Mosul Dam filled to its maximum operating level could result in a flood wave 20 metres (66 feet) deep at the city of Mosul,” it said.