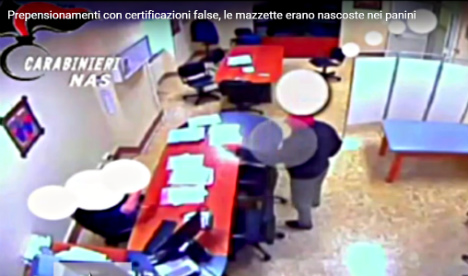 Quaglia is alleged to have helped some 592 workers from public organizations, including the post office, city councils and the national energy company, Enel, obtain fraudulent invalidity pensions between 2005 and 2015.

His method was to modify patients' claims by overstating their health problems – or in some cases completely inventing them – in return for €5,000.

The modified cases would then be placed in folders marked with a 'Q' and deliberately kept to one side.

Fudged claims would apparently only be rubber-stamped on days when Quaglia's alleged partner in crime, economy ministry inspector Enrico Maggiore, was chairing the review committee.

“Their repeated objective was to have the committee – chaired by Maggiore – sign patients off as invalids,” a spokesperson for Italy's police said.

For his troubles, Quaglia allegedly gave Maggiore €1,000 for each falsified case, which he often delivered to him in cash hidden inside his lunch pack.

The decade-long con was first brought to the attention of the investigators in September, after a perfectly fit and healthy teacher was discovered to be claiming an invalidity pension.

Footage of the audacious bribe was released by police on Tuesday, showing Quaglia surreptitiously slipping Maggiore a package in his office containing his 'lunch': a sandwich and a wad of €2,000 in cash.

Maggiore then checks the coast is clear before pocketing the cash and tucking into the sandwich.

The public prosecutor's office has seized accounts and assets worth an estimated €600,000 from Maggiore and €1.1 million from Quaglia as part of their ongoing investigation.

The release of the video comes just days after financial police reported that 2015 was a record year for corruption within Italy's public sector, with €4 billion frittered away between January and October.