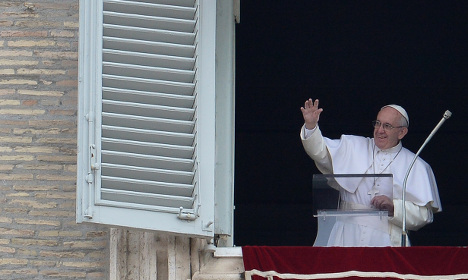 “I appeal to the international community to spare no effort to urgently bring parties back to the negotiating table,” the pontiff said. Photo: Tiziana Fabi/AFP

“I appeal to the international community to spare no effort to urgently bring parties back to the negotiating table,” the pontiff said at his weekly Angelus prayer.

“A political solution to the conflict is the only way to guarantee a future of reconciliation and peace for this dear, suffering country,” Francis said, before asking worshippers in St. Peter’s Square to join him in reciting the Catholic prayer “Ave Maria” for Syria.

The pope also said he was deeply concerned about the plight of civilians forced to flee their homes as fighting raged.

“I hope that, thanks to generous solidarity, there will be the necessary help to ensure their survival and dignity,” he said.

The Syrian peace talks were suspended on Wednesday amid renewed fighting on the ground, with advances into rebel-held territory by the Russian-backed regime in Damascus.

The negotiations were suspended until February 25th.

UN envoy Staffan de Mistura says he will meet in Munich, Germany, next Friday with countries that are part of an international group seeking a solution to the five-year-old war.