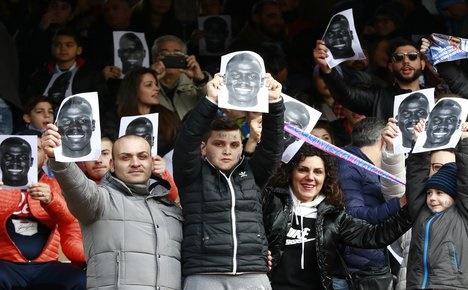 “It's great what the fans did today, it shows their affection for a lad who has a wonderful character,” Napoli coach Maurizio Sarri told reporters after a 1-0 win kept them top of Serie A with a two-point lead on champions Juventus.

The latest in a long line of racist incidents hit Italian football last week when France-born Senegal international Koulibaly was the victim of monkey chants during a 2-0 win at Lazio.

Referee Massimiliano Irrati, in accordance with league regulations, halted the match for nearly four minutes to demand a stop to the abuse.

Lazio were later handed a €50,000 fine and will see the Curva Nord (North End) of the Stadio Olimpico closed to fans for their next two home games.

While Irrati's decision to stop the game was roundly applauded as one of the league's new initiatives to stamp out racism, Koulibaly showed his disdain for his abusers by offering his Napoli shirt to a young Lazio-supporting ball boy.

A supporters' group, 'Quelli del Sangue Azzurro' (The Blue Blooded Ones), later called on Azzurri fans to show their full support for Koulibaly by holding up masks of his face.

And fans replied in their thousands, filling almost the entire stadium with masks of the African's face prior to kick-off against the visiting league strugglers.

A statement from the group last week said: “Everyone in Naples is offended by what happened to our young star. Because of this, we want to show our full support to Koulibaly.

“We are all with you, Kalidou. Our invitation to Napoli fans is to print a photo of the defender and put it on your face when the teams come on the pitch.”

In a post on his Instagram account, Koulibaly said: “It was unforgettable. Thanks to all the fans who, thanks to this memorable initiative, made the San Paolo an even more special place to be.”

The gesture was reminiscent of the stance taken by Treviso players in 2001 to show their support for 18-year-old Nigerian player Schengun Omolade, who fell victim to his own club's notoriously racist 'Blue Army' supporters' group.

At their next game, Treviso's starting team ran out on to the pitch with their faces blackened as Omolade – who had not been informed of the players' plans – sat on the bench astounded.