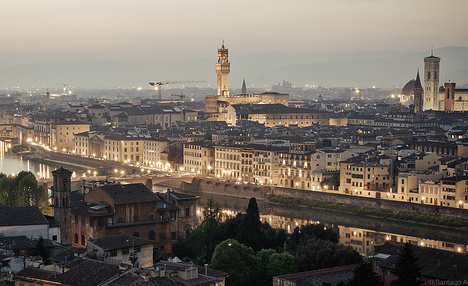 Sermons at Friday prayers will now be delivered in Italian in Florence mosques. Photo: Santiago Almada

The ruling, signed by the mayor of Florence, Dario Nardella, and the Izzedine Elzir, president of the Italian-Islamic Community, Uccoi, will push all Florence imams to deliver sermons In Italian during the most important weekly meeting in the Muslim church – the Friday prayer of Jummah.

It will also ensure that passages from the Koran are read out in Italian, not Arabic. It is hoped the milestone initiative will be rolled out across other Italian cities soon.

“It's about underscoring our citizenship. We are all Italian citizens and what unites us is our language and our culture,”  Elzir, also imam of Florence, told The Local.

“You have to remember that around 40 percent of Italian Muslims don't even speak Arabic, so there can be confusion during sermons if they are in Arabic.”

For this reason, some of the city's mosques already use the Italian language but the new pact will see those that don't forced to change in a bid to help Italian Muslims integrate into the social fabric.

“Obviously we will still have imams on hand to translate into Arabic to help out those who are still learning Italian,” Elzir added.

The so-called “citizens' pact” will also encourage integration by opening mosques up to non-Muslims.

It comes less than a month after Interior Minister Angelino Alfano established a council for relations with the country's Muslims, an advisory body the government hopes will help the minority to better integrate.

Each Florence mosque will be fitted with a noticeboard which will be managed by young Muslims charged with organizing social and cultural events in the city.

For the Tuscan city's mayor, the move represents an important step towards reducing the threat of home-grown extremism.

“Our greatest enemy is ignorance and not knowing each other. Our objective now is to replicate this pact in other major cities and promote a peaceful coexistence between different faiths.”

It is unlikely to be long before all cities adopt similar agreements: an almost identical agreement will be signed between Muslim leaders in Turin and the northern Italian city's mayor Piero Fassino on Tuesday.

Elzir hopes the pacts will help foster a more open relationship between Italian Muslims and non-Muslims.

“Certainly there is a negative and false impression of Islam in Italy and this is about creating an inter-religious dialogue and sending out an important message,” he said.